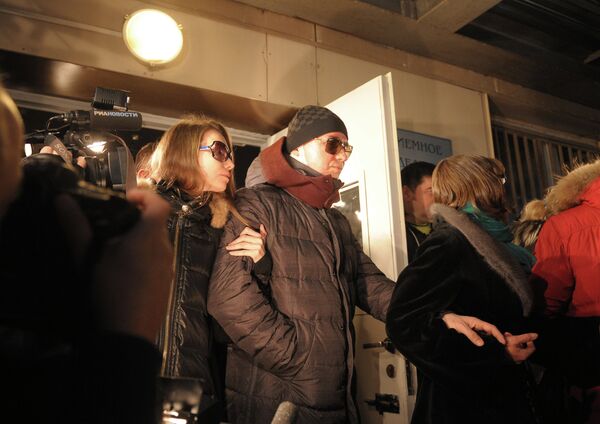 © RIA Novosti . Grigoriy Sysoev
/
Go to the photo bank
Subscribe
Police in Moscow have detained a suspect over a horrific acid attack on the Bolshoi Theater’s artistic director, a police spokesperson told RIA Novosti on Tuesday.

MOSCOW, March 5 (RIA Novosti) – Police in Moscow have detained a suspect over a horrific acid attack on the Bolshoi Theater’s artistic director, a police spokesperson told RIA Novosti on Tuesday.

A masked assailant threw concentrated acid into the face of Sergei Filin, the Bolshoi’s artistic director, on January 17 in Moscow and fled the scene. Filin suffered third-degree burns to his face and eyes.

“Yury Zarutsky, the suspected attacker, has been detained,” the spokesman said.

Zarutsky was detained in the Tver Region, northwest of Moscow, and will be brought to the capital soon, the spokesman added. No further information about the suspect was available at the time of publication.

Meanwhile, police also searched an apartment belonging to the Bolshoi Theater’s leading solo dancer Pavel Dmitrichenko, who was later detained in connection with the attack.

Police did not indicate whether Dmitrichenko is suspected of having played a part in the crime. Yekaterina Novikova, a spokeswoman for the theater, which is no stranger to scandal and intrigue, denied there was any open conflict between the two men.

“It’s clear that there are a lot of happy and unhappy people [working there], but there was no dramatic conflict,” Novikova said on Tuesday.
Filin, who underwent several surgeries in an attempt to rescue his eyesight, said last month he knew the identity of his attacker.

He also speculated the aim of the attack was to remove him as artistic director and destroy the prestigious Moscow ballet company's reputation. Filin is currently undergoing treatment in Germany.

Dmitrichenko has performed at the theater for more than a decade. In one of the most recent performances, he played the tsar in "Ivan the Terrible."

(Updated with the suspect’s name)