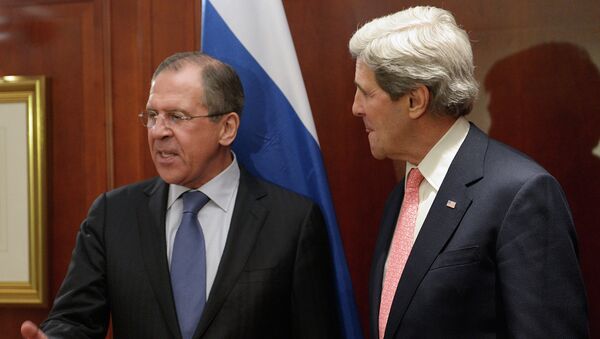 © Sputnik / Eduard Pesov
/
Go to the mediabank
Subscribe
International
India
Africa
The United States and Russia will do “everything possible” to facilitate a dialogue between the Syrian government and the armed opposition, Russian Foreign Minister Sergei Lavrov said Tuesday in Berlin following his first bilateral meeting with US Secretary of State John Kerry.

BERLIN, February 26 (RIA Novosti) –The United States and Russia will do “everything possible” to facilitate a dialogue between the Syrian government and the armed opposition, Russian Foreign Minister Sergei Lavrov said Tuesday in Berlin following his first bilateral meeting with US Secretary of State John Kerry.

“No one will solve the Syrians’ problems for them, but in order for this solution to be discussed, it’s necessary to sit down at the negotiating table,” Lavrov said following the nearly two-hour meeting with Kerry in the German capital.

US State Department spokeswoman Victoria Nuland speaking in Berlin, said Kerry and Lavrov spent more than half of their meeting discussing Syria in what she called a "really serious and hardworking session,” The Associated Press reported.

The two top diplomats discussed how to implement the so-called “Geneva Agreement” aimed at getting the Syrian government and the opposition to plan a transitional government for the time after Syrian President Bashar al-Assad steps down, the AP reported.

“Regarding Syria, the most important thing is that we confirmed our mutual understanding that the continuation of violence is unacceptable,” Lavrov said.

Addressing reporters in Moscow on Tuesday following his meeting with Kerry in Berlin, Lavrov warned that the Syrian opposition was being unduly influenced by “extremists who are betting on a military solution to the Syrian problem and are blocking any initiative leading to a dialogue.”

US State Department spokesman Patrick Ventrell told reporters in Washington Tuesday that he was aware of Lavrov’s comments and that the United States has expressed its “concerns about some of the extremist elements within the opposition.”

“We’ve been clear that in terms of the Syrian opposition, we look to support the opposition that’s democratic-inclusive, that’s looking for a moderate Syria, and obviously, isolate the extremist elements whose vision of Syria is very different,” Ventrell said.

Lavrov called Tuesday’s bilateral talks “constructive” and said he felt Kerry is open to a partnership between the two countries despite disagreements.

“There is a sense that Barack Obama’s second administration, with regards to foreign policy led by John Kerry, will strive to play a more constructive role” in issues such as the adoption of Russia children by Americans and the so-called “Magnitsky Act” that Washington enacted to punish Russian officials it deems guilty of rights abuses, Lavrov said.

Lavrov said Kerry vowed to personally take measures to ensure transparency with regards to Russian children adopted by US parents.

“We discussed in detail the problems with adopted Russian children,” Lavrov said following the meeting. “John Kerry admitted that these problems are not trumped-up … and gave assurance that he will personally undertake all necessary measures to ensure complete transparency and accountability for us in this sphere.”

The issue of safety of Russian adoptees in the United States has helped bring bilateral ties between the two countries to one of their lowest points since the end of the Cold War.

Lavrov, meanwhile, dismissed a report in the Kommersant daily Tuesday that cited diplomatic sources on both sides as saying that he and Kerry are likely to finally find common ground on a planned US missile defense system in Europe, which Moscow vehemently opposes.