First Day of Iran Nuclear Talks Ends With No Breakthrough 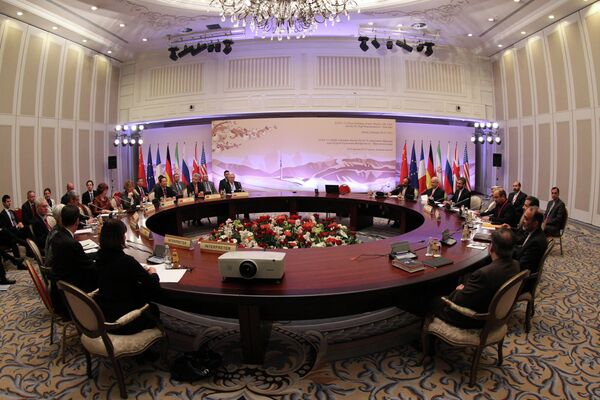 Participants of the first day of closed talks between Iran and a group of six nations held on Tuesday in the Kazakh city of Almaty were cautious in evaluating the results of the meeting.

ALMATY, February 26 (RIA Novosti) - Participants of the first day of closed talks between Iran and a group of six nations held on Tuesday in the Kazakh city of Almaty were cautious in evaluating the results of the meeting.

The Almaty talks came just days after Iran announced it was putting new high-performance gas centrifuges for enriching uranium at its Natanz facility into service - an essential precursor to making high-grade nuclear fuel or raw material for a nuclear weapon.

The meeting between Iran and five permanent members of the UN Security Council plus Germany “was useful,” Russian Deputy Foreign Minister Sergey Ryabkov said. He also said that he attended a bilateral meeting with the Iranian delegation on Tuesday afternoon.

A spokesman for the head of the EU delegation, Michael Mann, made no comment on the general atmosphere of the talks, citing the event’s closed format.

Mann told journalists that during the first day of the talks the sides discussed the proposals made to Iran by the group of six.

"Iran did not put forward any proposals today; the discussions focused on the proposal made by the group of six nations,” he said. “Talks on this proposal will continue tomorrow, and we expect the Iranian side to react.”

Tehran said ahead of the talks that it would put forward its own proposals, similar to the five-point plan outlined by Russian Foreign Minister Sergei Lavrov in 2011. The plan proposed a gradual easing of economic sanctions against Tehran in exchange for increased collaboration with the International Atomic Energy Agency (IAEA), the Vienna-based global nuclear watchdog.

Mann said on Monday the six-nation group of negotiators would come up with a “good and updated offer for the talks, which we believe is balanced and a fair basis for constructive talks.”

Western allies and Israel have accused Iran of using its nuclear program to develop an atomic weapons capability, a claim Iran has consistently denied. Tehran claims it needs atomic technology for producing electricity, although Iran has some of the world's largest reserves of oil and gas. Iran is under four sets of economic sanctions based on UN resolutions, as well as a number of sanctions imposed unilaterally by some Western countries.

Russia has repeatedly expressed concern over the slow pace of the nuclear talks with Iran, and stressed the need for the new meeting to be held as soon as possible. Iran and the Group of Six countries have held three rounds of talks over the Iranian nuclear issue last year, following a one-year break in negotiations. Those talks, however, failed to solve the deadlock.