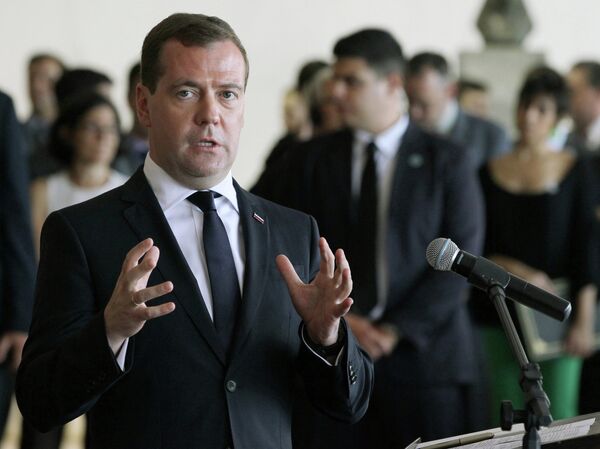 © RIA Novosti . Ekaterina Shtukina
/
Go to the photo bank
Subscribe
Russia and Brazil are capable of raising bilateral trade to $10 billion in the future, Russian Prime Minister Dmitry Medvedev said on Wednesday during a visit to Brazil.

BRASILIA, February 21 (RIA Novosti) - Russia and Brazil are capable of raising bilateral trade to $10 billion in the future, Russian Prime Minister Dmitry Medvedev said on Wednesday during a visit to Brazil.

According to Russia’s Federal Customs Service, Russian-Brazilian trade stood at $6.5 billion in 2011.

“It is very important that we outlined new projects [and] coordinated our positions on various dimensions of trade and economic cooperation. I think our target of reaching trade turnover of about $10 billion annually is absolutely realistic, taking into account the potential of our economies, and I hope that it would be reached within the next few years,” Medvedev said.

The Russian premier said Russia would like to run joint projects in industry, agriculture, space and power generation, including nuclear energy. A source in the Russian delegation earlier told RIA Novosti that Russia hopes to participate in a tender for the construction of four nuclear power plants in Brazil until 2030.

Medvedev has arrived in Brazil’s capital Brasilia on Wednesday morning Moscow time. On the first day of the visit, the two countries have resolved a dispute on pork exports to Russia. Russia’s federal food safety agency warned the United States, Canada, Mexico and Brazil in late 2012 that their meat imports could be halted should the shipments contain the additive ractopamine.

“We’ve discussed the problem of pork exports to Russia. Russian and Brazilian agricultural services have reached an agreement on the issue, and we have overcome all differences,” Brazilian vice president Michel Temer said. “We can say that we have reached very positive results.”

During the second day of his visit to Brazil, Medvedev will meet with have a working breakfast with Russian and Brazilian businessmen and will then head to Cuba.