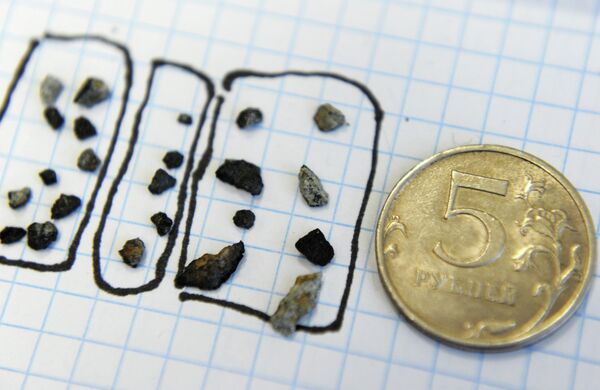 © RIA Novosti . Pavel Lisitsyn
/
Go to the photo bank
Subscribe
Police in the Chelyabinsk Region have confiscated an unidentified substance from a local man who was trying to sell it as a “meteorite fragment,” regional police told RIA Novosti on Tuesday.

MOSCOW, February 19 (RIA Novosti) - Police in the Chelyabinsk Region have confiscated an unidentified substance from a local man who was trying to sell it as a “meteorite fragment,” regional police told RIA Novosti on Tuesday.

Spokeswoman Anzhelika Chirkova said police had identified “a Chelyabinsk Region resident, born in 1984, who was trying to sell about 60 grams of a substance via the Internet as a meteorite fragment.”

The substance was sent to a lab for testing to determine its composition and any possible health risks it could pose, Chirkova said.

Scientists said over the weekend they had recovered fragments of the meteorite - which struck central Russia last Friday, causing widespread damage and hurting over a thousand people - from a lake in the Chelyabinsk Region.

Viktor Grokhovsky, a meteorite expert at the Urals Federal University, said fragments might be scattered around a territory of up to 100 square kilometers (62 square miles), and finding them might take years. So far, only 53 fragments about one millimeter (0.04 inches) in size have been found.

Law enforcement authorities have not officially confirmed the discoveries, but police said Monday people were trying to sell something billed as “meteorite fragments” online for 10,000 to 500,000 rubles (about $330 to $16,600).

Chirkova, the police spokeswoman, called on people not to buy the so-called fragments, as their composition and origin is unknown and they are being sold without any permits or certification.

Only two laboratories - one in Moscow and one in the Urals - are authorized to issue meteorite certificates.