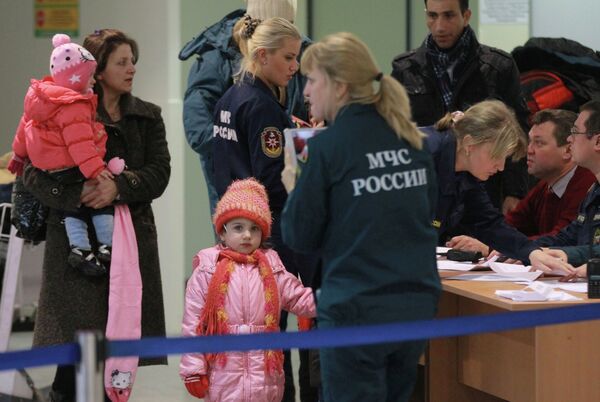 A Russian Emergencies Ministry aircraft has evacuated more Russians and nationals of other former Soviet republics from war-stricken Syria, the ministry reported Wednesday.

Two Emergencies Ministry planes, the Il-62 and an Il-76 (Candid), delivered humanitarian aid to the eastern Syrian city of Latakia on Tuesday. The aircraft carried around 46 metric tons of humanitarian aid, including tents and power generators. A ministry official said both planes were to return with evacuees later.

The Russian embassy in Syria estimated there were some 30,000 Russians living in the country, but other reports suggest the figure could be higher.

Two Emergencies Ministry planes brought 77 Russians back from Syria in late January. Russian officials denied the move was an indication that Moscow had changed its stance on Syria, its sole remaining ally in the Arab world.

Russia - along with China - has faced widespread condemnation over its refusal to approve UN sanctions against the regime of Syrian President Bashar Assad, whose forces the international community has accused of widespread human rights abuses.

However, Moscow has repeatedly stated it has no interest in seeing Assad remain in power, but is concerned that unilateral sanctions would create a power vacuum that would lead to more violence.

About 70,000 people have died in Syria since the start of the uprising against Assad in March 2011, according to UN figures.