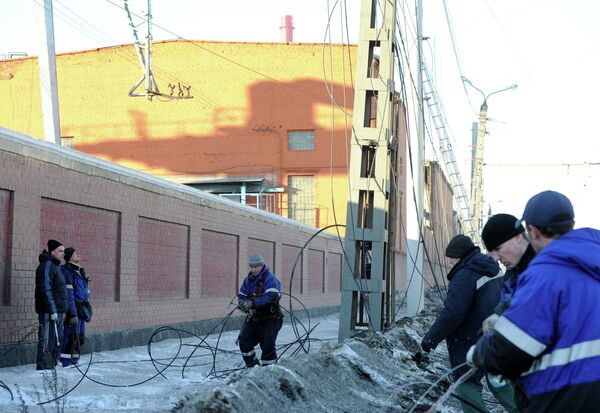 © RIA Novosti . Pavel Lisitsyn
/
Go to the mediabank
Subscribe
International
India
Africa
Over 24,000 workers and 4,300 pieces of equipment are involved in the effort to clear up the damage caused by a meteor that shook Russia’s Urals Region, the regional Emergences Center reported on Sunday.

YEKATERINBURG, February 17 (RIA Novosti) – Over 24,000 workers and 4,300 pieces of equipment are involved in the effort to clear up the damage caused by a meteor that shook Russia’s Urals Region, the regional Emergencies Center reported on Sunday.

A flaming meteorite streaked across the sky and slammed into central Russia on Friday with a massive boom that blew out windows and damaged thousands of buildings around the Urals city of Chelyabinsk, injuring more than 1,000 people in the area.

“As of 06:00 a.m. on Sunday, work has been done to replace window glass in 1,658 residential buildings, 34 health care organizations, 62 educational establishments and four social facilities. Window frames and glass have been restored on an area of 37,800 square meters. A total of 122 potential hazardous facilities have been inspected,” the Emergencies Center said.

The meteor blast, a rare and spectacular phenomenon, sparked confusion and panic among residents of the region and was captured by numerous witnesses on video that quickly spread to television and computer screens around the world.

Police and other officials said around 1,200 people had been hurt, including more than 200 children, mostly in the Chelyabinsk Region near the Ural Mountains. By the end of Friday, the number hospitalized was 50, according to the Emergencies Ministry. Earlier, at least two people were reported to be in "grave" condition.

The majority of those hurt had suffered cuts from broken glass, but the region's governor said two-thirds of the injuries were very light.

The blast was so powerful that it was detected by 11 of the 45 infrasound stations of the Comprehensive Nuclear Test Ban Treaty Organization (CTBTO)’s network designed to track atomic blasts across the planet.

"It was like a train falling down from the sky," a Chelyabinsk resident told RIA Novosti, adding that most people at first thought that a warplane had exploded above the city.