Russia to Build Complex on Putin Street in Bethlehem 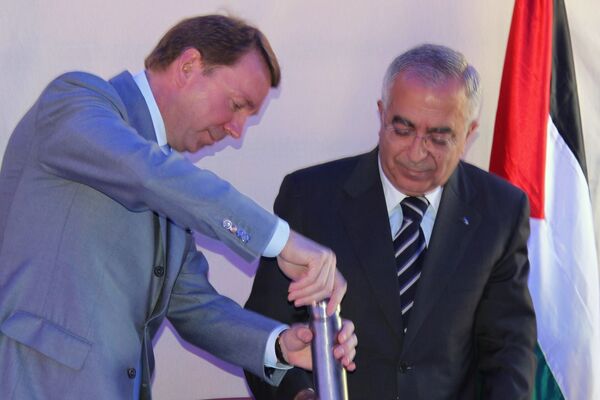 © RIA Novosti
Subscribe
Vladimir Kozhin, head of the presidential administrative directorate, on Friday officially launched the construction of a business and arts complex for Palestinians in the West Bank city of Bethlehem on Vladimir Putin Street.

BETHLEHEM, February 15 (RIA Novosti) - Vladimir Kozhin, head of the presidential administrative directorate, on Friday officially launched the construction of a business and arts complex for Palestinians in the West Bank city of Bethlehem on Vladimir Putin Street.

The project, to be financed by private sponsors, should be completed by December 2014. The complex will include a sports school, a music school and a business center.

It will be a place where Palestinians will be able to have “business meetings, share knowledge and experience, while young people would study music and practice sports,” Kozhin said as he put a memorial capsule into the foundation of the future building.

The new element of the Russian presence in Jesus Christ’s hometown will boost the development of the regional economy and help ensure Bethlehem’s prosperity, he said.

The multifunctional complex will be built next to the Russian center of science and culture that opened in Bethlehem last June, when President Vladimir Putin visited the region.

During the visit the head of the Palestinian National Authority, Mahmoud Abbas, told Putin that the mayor of Bethlehem had decided to name a street in the city after Putin to show how much the Palestinians value Putin and the Russian people.

The center was built on a land plot donated to the Russian Imperial Orthodox Palestinian Society (IPPO) by the Palestinian authorities four years ago.

Another Palestinian city, Jericho, has a street named after Dmitry Medvedev, who visited the country in January 2011.

Other streets carrying Putin's name include an avenue in Chechnya's capital, Grozny.