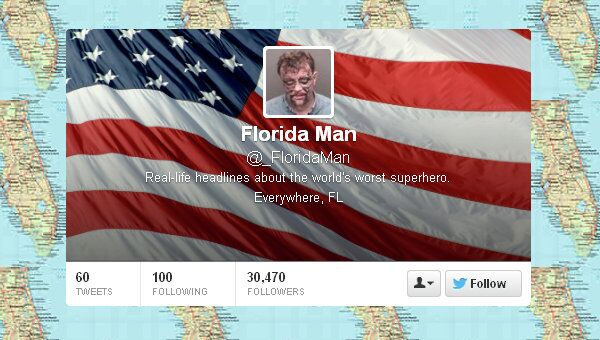 © Florida Man / Twitter
Subscribe
What do spanking a police horse, robbing a pet store with a syringe, and forcing an engagement ring down your fiancé’s throat have in common?

WASHINGTON, February 13 (By Carl Schreck for RIA Novosti) – What do spanking a police horse, robbing a pet store with a syringe, and forcing an engagement ring down your fiancé’s throat have in common?

They are all alleged crimes chronicled by a new anti-hero storming the Twittersphere: “Florida Man.”

Playing off Florida’s reputation as America’s craziest state, a Twitter feed launched this month at the handle @_FloridaMan collects some of the more bizarre, tragicomic and wince-inducing exploits of Y-chromosome bearers in the Sunshine State.

“Real-life headlines about the world’s worst superhero,” the account reads below a police mug shot of a white male with chaotically applied face paint.

Since its inaugural Tweet on Feb. 2—“Florida Man Arrested After Pocket-Dialing 911”—“Florida Man” has attracted more than 29,000 Twitter followers. The person or persons behind the project did not respond to an interview request sent via Twitter on Wednesday.

Florida’s gentle climate and white sand beaches have long been alluring for Americans and foreigners alike, attracting droves of tourists, immigrants and retirees seeking respite from colder parts of the country.

But the state also has a long history of quixotic and strange characters engaging in behavior that is garnering global attention thanks to the explosion of the Internet and social media over the past decade, said Gary Mormino, author of “Land of Sunshine, State of Dreams: A Social History of Modern Florida.”

“There used to be the old analogy that America was slightly tilted to the right, and that all the nuts rolled westward into California,” Mormino told RIA Novosti on Wednesday. “Now the idea is that the earth’s axis has shifted to the southeast, and Florida collects all of this.”

The popular podcast hosted by American comedian Adam Carolla regularly features a game in which contestants are asked to determine whether a certain bizarre incident or crime happened in Florida or Germany.

Barbara Hijek, who writes the “FloriDUH” blog for the South Florida Sun-Sentinel, joked that “the Creator wanted mankind to develop a sense of humor, thus Florida was created.”

“Seriously, it is a land of extremes: So many cultures, so much heat, way too many pain pill clinics,” Hijek told RIA Novosti Wednesday.

A third of Floridians were born in the state, while 48 percent of its residents were born in other states and 19 percent come from foreign countries, historian David Colburn noted in a recent essay for The Gainesville Sun.

“Florida is in some ways like seven or eight different states, and each state has its own orbit of crazy,” Mormino said.

“Florida Man,” meanwhile, continued burnishing his record of bad behavior on Wednesday, posting stories about attacking a police dog with a mop and obstructing traffic by “exposing sexual organs” in the middle of the street.

Florida-based writer Tim Dorsey told RIA Novosti Wednesday that the state has been the perfect well of inspiration and absurdity for his crime novels.

“A novelist couldn't ask to live in a better place for material,” Dorsey said. “I want to thank the criminally (and otherwise) insane of Florida for all their help in this matter.”