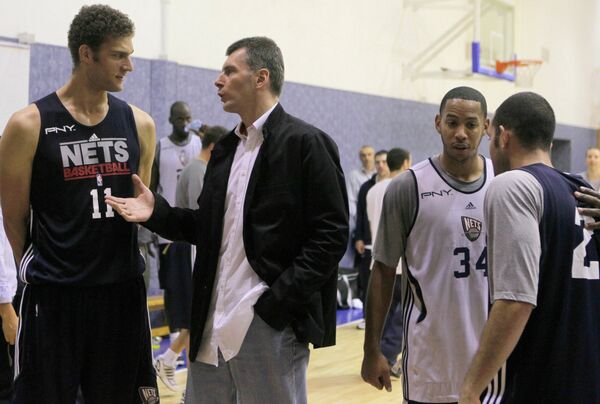 Russian-speaking representatives from organizations across the United States gathered in the US capital Wednesday for the second annual Silver Archer USA awards, presented to Russian-American projects that contribute to the development of bilateral relations.

This year’s event, held at the National Press Club in Washington, included entries from 20 contestants who embarked on business, scientific, cultural and media projects throughout the United States.

“I am confident that conducting competitions such as the Silver Archer in the United States will contribute to developing the dialogue between Russia and America,” Katya Pruett, a spokeswoman for the event's co-sponsor Severstal North America told the crowd in Wednesday's opening statement.

Among the winners honored at the event was Mikhail Prokhorov’s Onexim Sports and Entertainment for the company’s role in bringing a National Basketball Association (NBA) team to Brooklyn and the construction of the team’s home arena, the Barclays Center.

The firm is the majority owner of the Brooklyn Nets and holds a 45 percent stake in the arena, which opened this past September. Prokhorov’s spokeswoman, Ellen Pinchuk, accepted the award and read a note to the crowd from Prokhorov, who assured them that the Nets players had already learned the Russian alphabet.

Next year the team will watch a film by legendary Soviet filmmaker Andrei Tarkovsky in the original Russian, Pinchuk cited Prokhorov as saying.

The prize in the culture category went to the Musical Olympus Foundation, which organizes classical music festivals throughout the world, including at Carnegie Hall in New York City.

The venerable US-based, Russian-language literary magazine The New Review, or “Novy Zhurnal,” was awarded the prize in communications and media for 2012, a year that marked its 70th anniversary.

The event organizers lauded the magazine’s achievements in promoting Russian culture within the diaspora, nothing that it has published the work of Nobel Prize winners such as Ivan Bunin, Alexander Solzhenitsyn and Joseph Brodsky.

Advita Fund USA, a nonprofit founded by a St. Petersburg native that works to minimize the financial burden faced by cancer patients, was  honored for its efforts Wednesday. The organization has been active in finding bone marrow donors for patients in Russia, which does not have its own bone marrow registry.

Also honored was Russian businessman Viktor Vekselberg’s Renova Group for its work in helping to save the historic Russian colony Fort Ross in California from extinction.

The honorees at Wednesday’s ceremony accepted their award to the theme song from the iconic US television series “Dallas,” a possible nod to the finalists from the Texan town it was named after, located in the state which has significant Russian-speaking populations in metropolitan areas like Houston.

Arguably the most memorable honoree of the night was Soviet-born scientist Vladimir Shiltsev, who accepted the award for a team that buttressed legendary Russian scientist Mikhail Vasilyevich Lomonosov’s claim to the discovery of Venus’ atmosphere.

In a lively presentation, Shiltsev explained how US scientists in 2004 doubted that the rudimentary telescope used by Lomonosov in 1761 would have been capable of allowing him to see the atmosphere of Venus as the planet passed between earth and the sun.

When Venus embarked on the same journey last year, Shiltsev and his team from the United States, Russia and Canada used comparably primitive telescopes and viewed the same phenomenon that Lomonosov saw.

“It turned out that Mikhail Vasilyevich was right,” Shiltsev said.

Updated at 18:23 - adding details of the award given to Russia's trade representative