Investigators to Probe Lack of Flight Ban After Tu-204 Crash 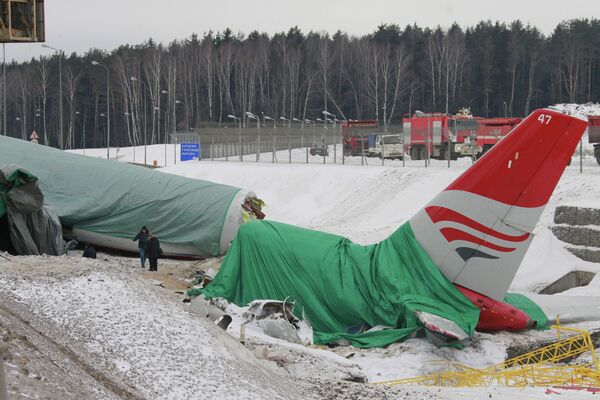 Russian investigators intend to question Transport Ministry officials to determine whether Tupolev Tu-204 airliners should have been grounded after one such plane crashed in December, killing five people as it skidded off a runway at Moscow's Vnukovo Airport, an official spokesman said Thursday.

MOSCOW, January 31 (RIA Novosti) – Russian investigators intend to question Transport Ministry officials to determine whether Tupolev Tu-204 airliners should have been grounded after one such plane crashed in December, killing five people as it skidded off a runway at Moscow's Vnukovo Airport, an official spokesman said Thursday.

"In addition to determining the technical causes [of the crash], investigators also consider it necessary to establish whether adequate measures were taken after the accident, in particular whether the decision not to ground aircraft of this type and recall the operator's license was sufficiently justified," Investigative Committee spokesman Vladimir Markin told reporters.

The Transport Ministry has responded by saying its staff are ready to answer investigators' questions about the incident, Prime News reported.

The Red Wings airline Tu-204 crashed on December 29 after its reverse thrust system failed to activate properly after the aircraft touched down, the Interstate Aviation Committee (MAK), a flight safety investigation body, said in an initial statement January 24. Three people survived the crash but were badly injured.

Markin said it was too early to definitively state the causes of the crash. He added that, after the completion of a full inquiry by MAK, the Investigative Committee would commission a comprehensive expert review including evidence from specialists in the aircraft's design, testing and operation.

The aircraft could be grounded by its designer, Tupolev, or MAK, which grants type certificates for aircraft flying in the CIS, or Russia's transport watchdog Rostransnadzor, part of the Transport Ministry. Russia's aviation watchdog Rosaviatsia also has the authority to ground individual aircraft by withdrawing their air worthiness certificates or the airline's operator's certificate.

Red Wings said on January 14 that it had carried out safety checks on all its eight Tu-204s in accordance with instructions from Rosaviatsia and found all fit to fly, and was continuing to use them as normal. The airline said it had undergone routine inspections on December 28 by Rostransnadzor and passed them.

The only other fatal accident involving a Tu-204 was the loss of an Aviastar-TU-operated airliner landing at Moscow's Domodedovo Airport in March 2010, blamed on pilot error, FlightGlobal reported.