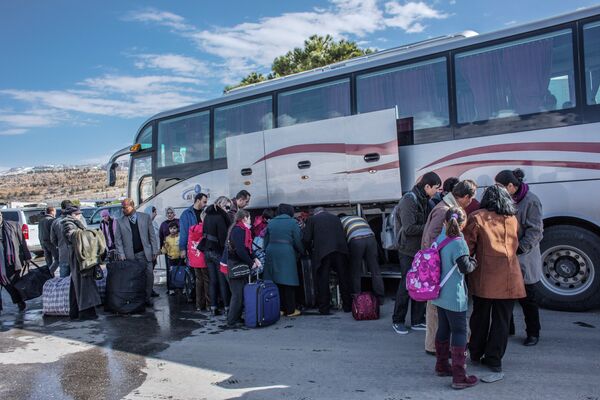 © RIA Novosti . Andrei Stenin
/
Go to the photo bank
Subscribe
Russia sent two planes to the Middle East on Tuesday to fly about 80 of its nationals out of Syria, according to the Emergency Situations Ministry and diplomats in the region

MOSCOW, January 22 (RIA Novosti) - Russia sent two planes to the Middle East on Tuesday to fly about 80 of its nationals out of Syria, according to the Emergency Situations Ministry and diplomats in the region.

A Yak-42 and an Il-76, which can carry a total of about 100 passengers, flew from Moscow to the Lebanese capital, Beirut, with the first of the two arriving shortly after 5 p.m. Moscow time.

Russian Embassy officers from Damascus came to the Jeida border crossing point on the Syrian-Lebanese border to provide consular assistance to Russians wishing to leave Syria, a RIA Novosti correspondent reported from the crossing.

According to the embassy, a total of 81 people were on the list of Russian nationals wanting to go to Russia; 79 of them arrived in Jeida, on the Syrian side of the border, on Tuesday afternoon. Four buses of Russian nationals are traveling from the border to Beirut, where they are to be met by staff from the local Russian Embassy.

The group includes Russian women who have married Syrians, their children and husbands who have acquired Russian citizenship.

From Lebanon they will fly to Moscow.

A source at the Russian Embassy in Damascus said by telephone that the staff there has maintained “constant contact” with Russian nationals in the country.

In October, around 1,000 Russians said they wanted to leave Syria, but in December the number fell to about 100, according to the embassy.

The Emergency Situations Ministry has opened a hotline for Russians in Syria and their relatives.

Psychological counseling and medical aid posts, as well as a Federal Migration Service post, will be opened at Moscow’s international Domodedovo airport, where the two planes are due to land, the ministry said.

The transport assistance comes about a week after the temporary closure of the Russian Consulate General in the northwestern Syrian city of Aleppo, the scene of months of vicious fighting between government forces and rebel groups. The Russian Embassy in Damascus remains open, however the Foreign Ministry said Tuesday that cuts in staff were possible.

The embassy has told RIA Novosti that 8,008 Russian nationals are registered in its official lists, but diplomatic sources have estimated that about 25,000 more Russian women married to Syrians live in the country without registering at Russian consular services. The embassy source interviewed by telephone Tuesday said it was difficult to know exactly how many Russian nationals remain in Syria because many have left.

One Russian national reached by telephone in Damascus on Tuesday told RIA Novosti that she has decided not to leave the city because she does not want to "yank" her children out of school in the middle of the school year; besides, she added, there she has a job, and in Moscow work is hard to find. She said food, water and power supplies in Damascus were fine, but few people went outside at night. If living in the city becomes "impossible, like in Aleppo," she said, then she would leave.

At least 60,000 people have been killed in Syria in the conflict between government and rebel forces in since March 2011, according to UN estimates released in January.

Updated with numbers of Russians in Syria and quotes from Russian national in Damascus.