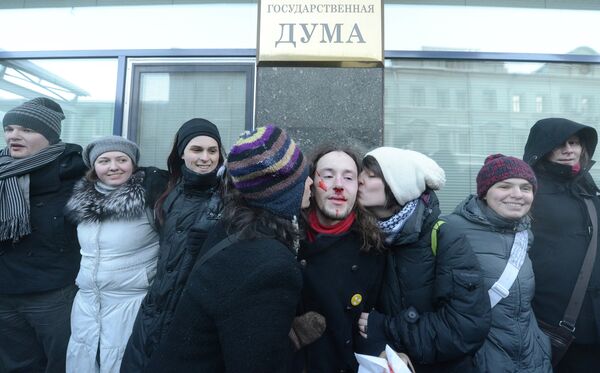 Supporters and opponents of a proposed federal law banning gay propaganda clashed on Tuesday outside the State Duma, the lower chamber of the Russian parliament, a RIA Novosti correspondent reported from the scene.

MOSCOW, January 22 (RIA Novosti) - Supporters and opponents of a proposed federal law banning gay propaganda clashed on Tuesday outside the State Duma, the lower chamber of the Russian parliament, a RIA Novosti correspondent reported from the scene.

The bill was to be debated by the State Duma on Tuesday, but the discussion and vote in the first reading were adjourned until Thursday. Gay rights activists, however, said they would go ahead with their planned protest outside the State Duma building in central Moscow.

The rally was titled “For traditional values: love, family and respect for human dignity.” A few minutes after the protest began at midday, a fistfight broke out between LGBT activists and their opponents, who also came to the venue. A RIA Novosti correspondent estimated the total number of people attending the event at around 30, half of whom partook in the fight. Some local media outlets estimated the number of LGBT activists attending to be slightly higher.

Proponents of the bill also bombarded the gay rights supporters with raw eggs and sprayed them with ketchup. Local media identified Christian Orthodox activists, among them Dmitry Tsorionov, also known as Enteo, among those partaking in the fight.

LGBT rallies against the bill were also planned in other Russian cities - Samara on Volga, Tomsk in Siberia and Arkhangelsk in northern Russia.

The bill, introduced by the Novosibirsk Region Legislative Assembly, bans promotion of homosexual, lesbian, bisexual, and transgender practices among minors and stipulates that "gay propaganda" should be viewed as an administrative offense.

Similar laws have been passed by regional legislatures in Novosibirsk, St. Petersburg and other Russian regions.