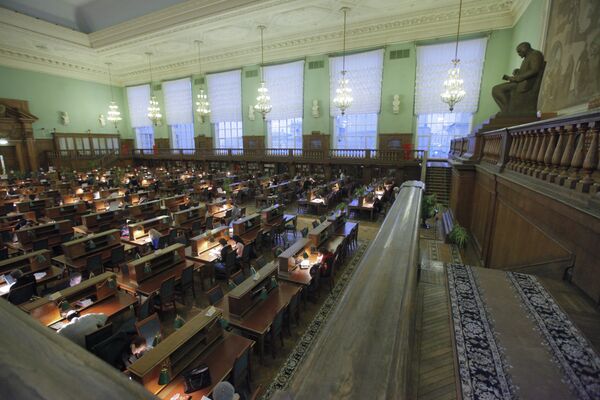 Moscow expressed outrage on Thursday after a US court imposed a $50,000 a day fine on Russia for failing to comply with an earlier order to hand over religious texts to the US Hasidic community in America.

MOSCOW, January 17 (RIA Novosti) - Moscow expressed outrage on Thursday after a US court imposed a $50,000 a day fine on Russia for failing to comply with an earlier order to hand over religious texts to the US Hasidic community in America.

The Foreign Ministry said Wednesday's ruling by Chief Judge Royce Lamberth of the US District Court on the Schneerson collection of sacred Jewish books was unprecedented, “absolutely unlawful and provocative” and “fraught with the most serious consequences.”

Russia is ready to respond robustly to the attachment (seizure of property to ensure satisfaction of a ruling) of any Russian property in the United States, the Russian Foreign Ministry said.

The Schneerson Library is a collection of books and religious documents assembled by the Chabad-Lubavitch Hasidic movement over two centuries prior to World War II in Belarus. It is one of the main Jewish religious relics.

The Schneerson collection is part of Russia's national heritage and the state property of the Russian Federation, the ministry said, adding that the ruling is, “exterritorial and at odds with international law.”

Part of the collection, amassed by Lubavitcher Rebbe Yosef Yitzchok Schneerson, was nationalized by the Bolsheviks in 1918. Later, about 25,000 pages of manuscripts fell into the hands of the Nazis, and were later seized by the Red Army and handed over to the Russian State Military Archive. This part of Schneerson's Library is now kept in the archive of the Lenin Library in Moscow.

The remaining part was taken out of the Soviet Union by Schneerson, who emigrated in the 1930s.

Since 1991, the year of Schneerson's death, leaders of the Brooklyn-based Orthodox Jewish movement have been trying to regain possession of the library, claiming it was illegally held by the Soviet authorities after the war.

In 1991, a Moscow court agreed to turn over the library to Chabad, but after the Soviet Union collapsed, the ruling was ignored. The Russian government now says it wants to keep the archive for future scholars.

In 2010, a court in Washington confirmed the American Jewish community’s right to the library, but Russia said the court’s decision was illegitimate. In late 2011, a US court ruled Russia must return about 12,000 books and 50,000 manuscripts from the library.

A lawyer for Chabad, Seth Gerber, said on Wednesday the group will "seek to enforce the sanctions order by all legal means," including attempting to attach Russian property in the US, as authorized by the court and the Foreign Sovereign Immunities Act, according to AP. Under that law, a sovereign nation is not immune to lawsuits in cases where property is taken in violation of international law.

"At the end of the day, all we want is our property back," said Rabbi Yosef Cunin of Chabad. "No amount of money can replace it. Our religious heritage is priceless."

The legal dispute over the Schneerson Library has caused Russian art institutions to cancel scheduled loans of world-renowned artworks to US art institutions for fear that they would be seized, even though Chabad has stated it will not go after any art deemed culturally significant by the State Department. Such art is protected from legal claims under the Immunity from Seizure Act.

“It was a strange Russophobic show grossly violating both US legislation, as admitted by the US administration, and all the norms of international law,” he told a news conference hosted by RIA Novosti on Thursday.

“By the same logic, [Moscow’s] Khamovniki District Court could open hearings on the status of Alaska,” he said, adding that the claims by one of the US Hassidic communities to the Schneerson Library “are simply ridiculous.”

Updated with Russian Culture Minister’s comments in the last paragraph.