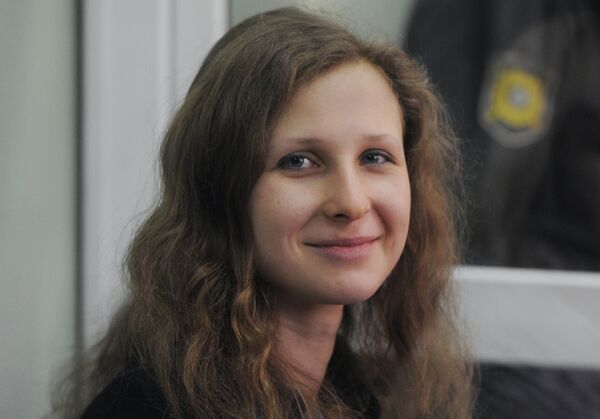 © RIA Novosti . Pavel Lisitsyn
/
Go to the photo bank
Subscribe
A Russian court on Wednesday rejected a plea from a jailed member of the feminist punk group Pussy Riot to have her prison term deferred until her young son reaches adolescence.

MOSCOW, January 16 (RIA Novosti) – A Russian court on Wednesday rejected a plea from a jailed member of the feminist punk group Pussy Riot to have her prison term deferred until her young son reaches adolescence.

Maria Alyokhina, 24, mother of five-year-old Filipp, asked for her two-year sentence to be delayed until her son turns 14, as allowed under Russian law.

“I’d really like a small miracle to happen today,” Alyokhina told the court before the ruling.

She was sent to jail in August and has not seen her son since. Alyokhina said her sentence should be postponed to allow her to raise her son.

The court, based in the Urals town of Berezniki, famous for its sinkholes and prisons, refused to grant her request; some Russian media reported the official reason was that her initial sentence was lenient enough and "already" took into account the fact that she has a young child.

Alyokhina was convicted along with two other group members after their anti-Putin performance in Christ the Savior Cathedral last February. One of them, Yekaterina Samutsevich, got her sentence suspended on appeal. The third band member, Nadezhda Tolokonnikova, 23, has a four-year-old daughter, but has not asked for her sentence to be deferred thus far.

The prosecution insisted that Alyokhina’s sentence should not be deferred, citing demerits she received in prison and in pretrial custody. She has been repeatedly disciplined for failing to get up at the wake-up call.

Alyokhina refused to repent, saying she was not guilty. Dozens of her supporters and journalists gathered at the small town’s court on Wednesday for the hearing.

Updated with details in first and fifth paragraphs.