Russians March Against US Adoption Ban 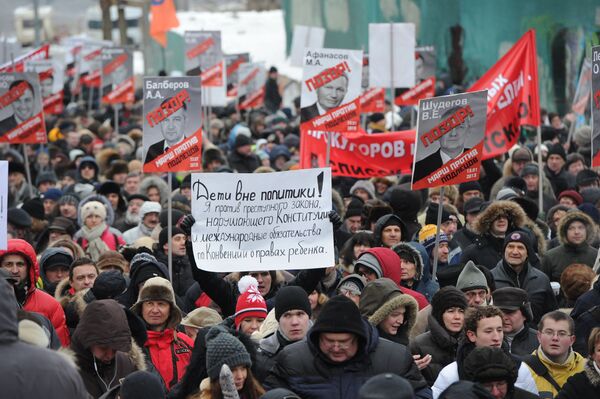 Thousands of people braved freezing temperatures in Moscow on Sunday afternoon to protest a government ban on adoptions of Russian children by US nationals, as well as to call for the dissolution of parliament, which initiated the legislation.

MOSCOW, January 13 (Marc Bennetts, RIA Novosti) - Thousands of people braved freezing temperatures in Moscow on Sunday afternoon to protest a government ban on adoptions of Russian children by US nationals, as well as to call for the dissolution of parliament, which initiated the legislation.

“Hands off the children!” chanted protesters as they streamed through boulevards a short distance from the Kremlin, while a police helicopter hovered above. Some protesters carried placards portraying lawmakers who voted for the ban to a waiting dumpster.

Protest organizers said some 50,000 people had attended the march, while police put the figure at just 9,500. Nine people were detained at the rally for “breaking laws governing participation in mass events,” police said.

“It’s disgusting that our politicians are using children as political pawns,” said protester Tatiana Shilova, a 45-year-old real estate agent. “I refuse to recognize a parliament that would do such a thing.”

Opponents of the ban say it effectively condemns Russian children in state care to lives of misery in what they say are underfunded and sometimes brutal institutions, referred to in Russian as “children’s homes.” Nearly 130,000 children were eligible for adoption in the country as of late December, according to official figures. In 2011, that number was 82,000, while just 7,400 were adopted by Russian nationals that year.

“I’ve never come out to a protest before, but this law is the last straw,” Shilova added.

A host of famous Russian actors and writers spoke out against the law in the run-up to the march, urging people to take to the streets.

“If we remain indifferent to this…we are accomplices. It’s as simple as that,” writer Viktor Shenderovich said in a video address uploaded to social networks.

“Just imagine, there are some sick children, without moms or dads, living in terrible children’s homes,” said Tatyana Dogileva, an actress, in another video address.

“Their parents have already come to see them, from America, and said, ‘We are your mom and dad.’ They’ve already shown them the house where they will live,” she went on. “And then the politicians play their dirty, awful games.”

The adoption ban, which came into force January 1, is part of Russia’s wider response to the United States’ so-called Magnitsky Act, which introduces sanctions against Russian officials suspected of involvement in human rights abuses. The US law – which the Kremlin called a “purely political, unfriendly act” – was named after Sergei Magnitsky, a whistleblowing lawyer who died under disputed circumstances in a Moscow pre-trial detention center in 2009.

The ban will affect almost all of the children – some with serious illnesses – now at various stages of the adoption process by US families, which the US State Department estimated last week at 500-1,000.

Over 60,000 Russian children have been adopted by American families in the last 20 years, including around 1,000 in 2011, according to US State Department figures. In introducing the controversial ban late last year, Russian lawmakers cited the deaths of 19 of those children, since 1999, at the hands of their US adoptive parents and President Vladimir Putin signed the bill into law just before the New Year.

The ban has split public opinion in Russia and provoked rare open criticism from government figures, with even Foreign Minister Sergei Lavrov speaking out against it.

Putin's spokesman, Dmitry Peskov, told the online TV channel Dozhd on Sunday that he understood that people were concerned by the law, but said it was aimed at creating the "necessary conditions" to improve Russian orphanages and allow more Russian families to adopt. But he also called criticized calls for the dissolution of the two houses of parliament as "disrespectful."

A top lawmaker from the ruling United Russia party, Andrei Isayev, appeared to threaten protesters on the eve of the rally.

“Let’s look attentively and remember the faces of the organizers and active participants of this rally,” he wrote on his party’s official website. “Our task in the years to come is to drive them to the farthest corners of political and public life, to the middle of nowhere.” Isayev also dubbed the protesters “child-sellers.”

Some 56 percent of Russians indicated they are in favor of the ban in a poll released by the Public Opinion Fund in late December. But Putin’s decision to approve what he called an “adequate” response to the Magnitsky Act has also further highlighted the divide between the authorities and the urban, educated class that has formed the backbone of the ongoing protests against his 13-year rule as president and prime minister.

While most high-profile figures in the protest movement stayed out of the limelight on Sunday, leaving the organization to civil activists, protesters combined calls for a repeal of the adoption ban with chants such as “Putin is a thief.”

Sergei Udaltsov, the leftist leader facing jail on charges of plotting to overthrow Putin, was the sole well-known opposition figure to play a leading role in Sunday’s rally.

Udaltsov’s Left Front movement was just one of a number of leftist and nationalist movements to put aside their anti-US rhetoric to participate in the demonstration.

“I am against capitalism and US foreign policies,” Udaltsov said at the rally. “But we are all united here against this terrible law.”

The ban was overwhelmingly approved by Russia’s lower house of parliament, the State Duma, and unanimously by its upper house, the Federation Council, in voting in December.

Yekaterina Lakhova, the United Russia lawmaker who sponsored the ban, said she had paid a visit to the rally to see for herself the people opposed to the law, but left early due to the cold.

“These people…are always disgruntled about something,” she told Dozhd.

Much smaller marches against the ban also took place in a number of other Russian cities.

Updated with correct number of children eligible for adoption.