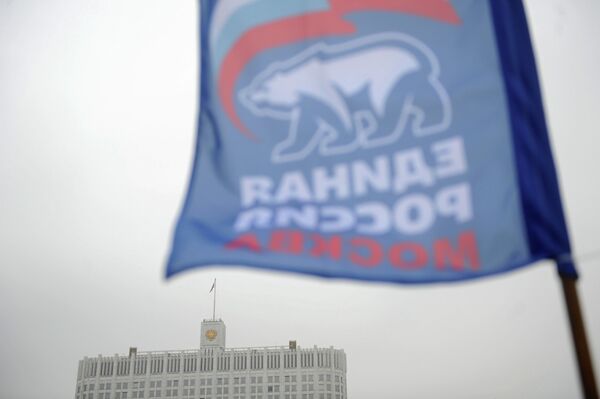 © RIA Novosti . Kirill Kallinikov
/
Go to the mediabank
Subscribe
International
India
Africa
Russia’s ruling party said it would support a tentative Kremlin proposal to lift a ban on electoral blocs, imposed during the party’s heyday in the mid-2000s.

MOSCOW, January 10 (Alexey Eremenko, RIA Novosti) – Russia’s ruling party said it would support a tentative Kremlin proposal to lift a ban on electoral blocs, imposed during the party’s heyday in the mid-2000s.

The reform is championed as benefitting the small non-parliamentary parties, but the flagging “party of power,” United Russia, would in fact be the main beneficiary, a prominent expert on political parties, Yury Korgunyuk, told RIA Novosti on Thursday.

Sergei Neverov, a Duma Deputy Speaker with United Russia, said this week that the party is ready to support the proposal.

But the Duma entry threshold should be higher for blocs than for single parties, and bloc members should be required by law to stick to their election programs, Neverov said in a comment on the party’s website published late Wednesday.

The threshold at the next Duma vote in 2016 is currently set at 5 percent, but political consultant Yevgeny Minchenko told RBC news website on Wednesday that he advised the bill’s authors to set it at 3 to 5 percent for single parties and 7 percent for blocs.

Russian political landscape underwent a major change after the Kremlin rolled back its draconian party legislation in a concession to mass protests against United Russia’s narrow victory in the 2011 Duma elections, which critics said were rigged.

The number of political parties in Russia went from seven to 54 over 2012 thanks to the rollback, but next to none of them has any legislative representation, and many are considered Kremlin spoilers.

The reintroduction of electoral blocs could allow United Russia to maintain a grip of power by aligning with such spoilers, boosting constituency and presenting a new face to the voters, said Korgunyuk, an expert with Indem, a non-profit private think-tank in Moscow.

“It’ll be a new edition of the party of power,” Korgunyuk said.

United Russia’s support rating is declining in the long term, down from 55 percent in 2009 to 41 percent last December, according to state-run Public Opinion Foundation. The party is struggling with an identity crisis aggravated by the vote-rigging accusations.

But the opposition – which criticized the ban on blocs for years – would find it harder to capitalize on its lifting because ideological differences would prevent it from forming a unified bloc, Korgunyuk said.