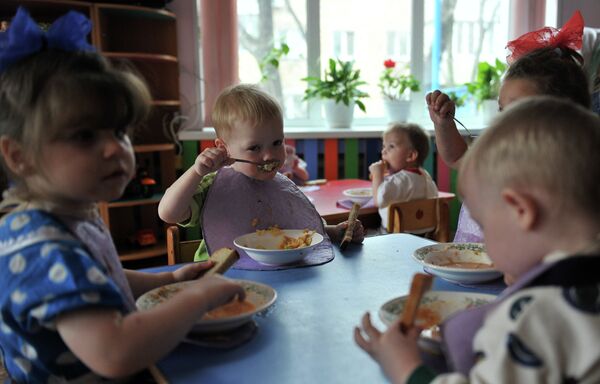 A Kremlin spokesman said Thursday that a Russian-US adoption agreement would remain in force until year’s end, but earlier comments by the same official, as well as the Foreign Ministry, suggest this will do little if anything to lift a Russian adoption ban imposed on Americans late last year.

MOSCOW, January 10 (RIA Novosti) – A Kremlin spokesman said Thursday that a Russian-US adoption agreement would remain in force until year’s end, but earlier comments by the same official, as well as the Foreign Ministry, suggest this will do little if anything to lift a Russian adoption ban imposed on Americans late last year.

“The agreement is in force at the moment,” President Vladimir Putin’s press secretary, Dmitry Peskov, told RIA Novosti, adding that “it will be in force over the course of the year.”

Late last month, however, Peskov told the Dozhd online TV channel that only those children whose adoptions had already been approved by binding court rulings would be allowed to join their adoptive families. Dozhd calculated that this would mean only six of 52 wards of the state in the process of being adopted by US parents would be able to leave Russia, while 46 would have to stay.

It has long been known that the bilateral agreement, in force since November and meant to facilitate adoptions of Russian children by US families, would formally expire only one year after either side bowed out of it.

However, on Wednesday, the Russian Foreign Ministry emphasized that the agreement was now “terminated,” not suspended as stated by the US State Department a day earlier.

According to one explanation in the Russian press, even if the bilateral deal persists on paper, Russian courts are unlikely to approve US adoptions after the law banning them came into force January 1.

US State Department spokeswoman Victoria Nuland told a news briefing in Washington on Thursday that American officials had seen the comments and that they would be “inquiring” with their Russian counterparts to find out “how they see this.”

“We don’t know yet, but we are very hopeful that in the spirit of the original agreement — and out of humanitarian concerns — that we will be able to work through the cases that had begun,” Nuland said.

She said State Department officials had been contacted by around 950 individuals after issuing a request for information from American families concerned about how the new law could impact their plans to adopt children from Russia.

The ban, signed into law by Putin on December 28, 2012, is part of Russia’s response to the United States so-called Magnitsky Act, enacted earlier in December. The act introduced sanctions against Russian officials suspected of human rights abuses and was named after Sergei Magnitsky, a whistleblowing lawyer who died in a Moscow pre-trial detention center in 2009.

The US State Department called the adoption ban “politically motivated.” While slightly more than half of Russians support the ban, according to one major pollster, critics say it would keep many children, including those with disabilities, in Russia’s impoverished and overburdened orphanage system.

According to US figures, more than 60,000 Russian children have been adopted by American families in the last 20 years, including 962 last year.

Russian officials complain they have not been granted access to monitor the wellbeing of adopted children and blame US adoptive parents for the deaths of at least 19 of them.

The new law is named for Dima Yakovlev (whose American name was Chase Harrison), a Russian toddler who died of heatstroke in 2008 after his American adoptive father left him in a car for hours.

A number of high-level Russian officials, including Foreign Minister Sergei Lavrov, have criticized the adoption ban. While the ban is the most controversial aspect of the new legislation, the law included other retaliatory measures as well, such as banning alleged US abusers of Russian citizens’ rights from entering Russia and freezing any assets they may have here.

Updated with comments from US State Department.