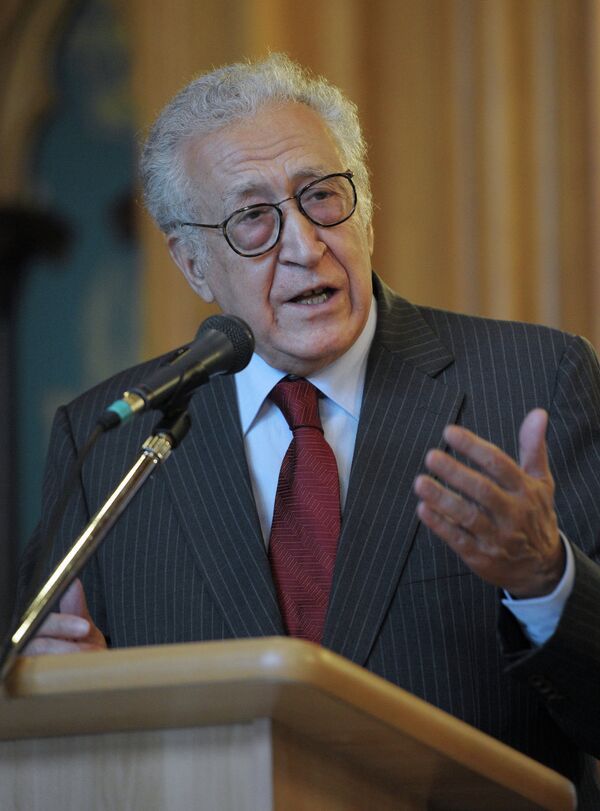 © RIA Novosti . Grigori Sysoev
/
Go to the photo bank
Subscribe
The UN and Arab League’s envoy for Syria, Lakhdar Brahimi, is due to visit Moscow on December 29, Russia’s Foreign Ministry said on Thursday, as talks continue to try to end the violence in the Middle East country.

MOSCOW, December 27 (Marc Bennetts, RIA Novosti) – The UN and Arab League’s envoy for Syria, Lakhdar Brahimi, is due to visit Moscow on December 29, Russia’s Foreign Ministry said on Thursday, as talks continue to try to end the violence in the Middle East country.

But Foreign Ministry spokesman Alexander Lukashevich denied speculation that Russia and the US had hammered out a plan to move forward discussions on the Syria conflict, which the UN says has left tens of thousands dead since an uprising against President Bashar al-Assad began in March 2011.

“There has not been and is no such plan,” he said.

"In our talks with Brahimi and with our American colleagues, we are trying to feel a way out of this situation on the basis of our common plan of action that was agreed on in Geneva in June,” he went on. "We plan to discuss a range of issues linked to a political and diplomatic settlement in Syria, including Brahimi's efforts aimed at halting the violence and the start of a comprehensive national dialogue."

Syrian Deputy Foreign Minister Faisal Makdad and an aide arrived at Russia's Foreign Ministry early on Thursday. Makdad was believed to have met his Russian counterpart Sergei Lavrov, but no details of any discussions were made public.

“They came to find out how far Moscow is willing to support Assad,” suggested Moscow-based Middle East analyst Vladimir Akhmedov.

Russia, along with China, has drawn heavy Western criticism for its refusal to support UN sanctions against Assad's regime. Moscow said the proposed UN resolutions betrayed a pro-rebel bias and would do nothing to bring peace.

But President Vladimir Putin sparked speculation of a shift in Russia's strategy earlier this month when he said the Kremlin was “not that concerned” with Assad’s fate.

Moscow also refused on Thursday to rule out that it could hold talks with the Syrian National Coalition, the opposition grouping that has been recognized as the legitimate ruler of the Middle East state by Western powers.

“But when and at what level, that’s an entirely different matter,” Lukashevich said

Lukashevich also said Russia had no information that would confirm Western media reports that Assad’s forces had begun employing chemical weapons against rebels. “We have been attentively monitoring the situation,” he said.

US President Barack Obama warned Assad earlier this year that such a move would cross a “red line” and could trigger “enormous consequences.”

But Moscow-based analysts doubted the West was ready to launch an invasion of Syria.

“America is not ready or does not want to invade - this much is completely obvious,” said Sergei Demidenko of the Moscow-based Institute of Strategic Studies and Analysis. “And European countries will not go in alone.”

Russia also reiterated its position that talks on the future of Syria can get underway without the departure of Assad.

“No one has set his departure as a pre-condition,” Lukashevich said.

“This is not a condition of the Geneva agreement,” he added.

Western powers had insisted on Assad’s departure before the formation of a new government of national unity, but Russia insisted that the decision be left to the “Syrian people.” The final document stated that regime figures could be part of the new government, but made no explicit mention of Assad’s future.