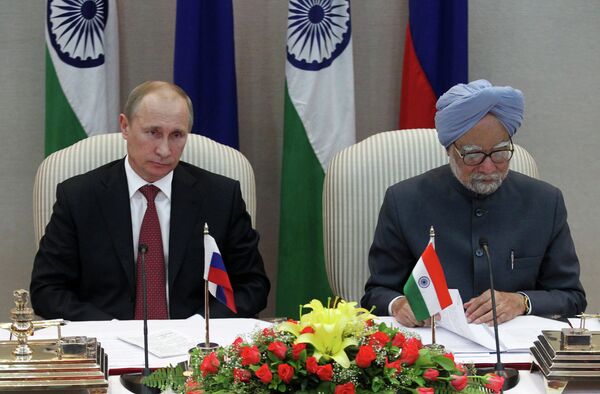 © RIA Novosti . Press service of the president of the Russian Federation
/
Go to the photo bank
Subscribe
Russia is to supply India with combat helicopters and warplanes worth $2.9 bln under a deal signed during Russian President Vladimir Putin’s visit to New Delhi on Monday.

NEW DELHI, December 24 (RIA Novosti) – Russia is to supply India with combat helicopters and warplanes worth $2.9 bln under a deal signed during Russian President Vladimir Putin’s visit to New Delhi on Monday.

“We have agreed to further strengthen our partnership in the sphere of military cooperation,” Putin said after a meeting with Indian Prime Minister Manmohan Singh.

The two countries also signed a number of cooperation agreements in the defense and technology sector during Putin’s one-day visit, his first to southeast Asia since his return to the Kremlin in May.

India is now the world's largest arms importer and Russian-made military equipment makes up some 70 percent of India’s arms purchases. But Moscow has lost out on a number of deals to Western countries in recent years. Boeing was chosen last month by India over Russia's MiL plant for a major helicopter contract.

New Delhi has expressed dissatisfaction with a deal in the delivery of the aircraft carrier Admiral Gorshkov, which is being refurbished by Russia for the Indian navy. Russia was due to deliver the vessel in 2008, but work has dragged on and the price has doubled to $2.3 billion.

Putin said on Monday he wanted to see annual trade turnover between Russia and India double from the current $10 bln in the coming years.

The Russian president also hailed Moscow and New Delhi’s cooperation in the spheres of science, investment and energy.

Putin said “the deepening of friendship and cooperation with India” was among Russia’s “top priorities” in foreign policy.