Navalny Declines to Join His Own Party 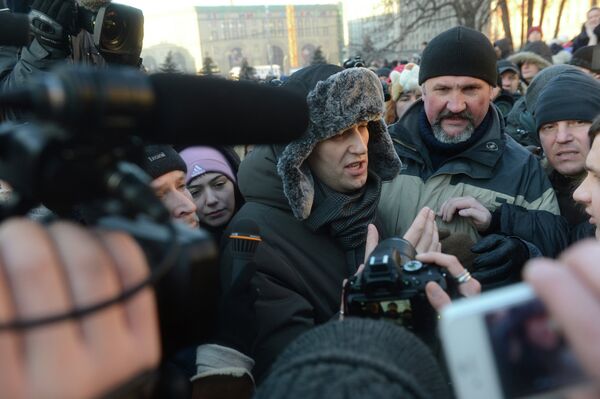 The People’s Alliance party held its founding congress in Moscow on Saturday.

The party settled on a program and appointed a ruling council of 15 members, said the congress’ chair, regional legislator Leonid Volkov.

But through some of Navalny’s aides-de-camp are the driving force behind the party, the whistleblowing lawyer and opposition leader confirmed his earlier decision not to join it.

“People’s Alliance is my party,” Navalny said in a speech at the congress.

“But I don’t think that right now People’s Alliance needs another member who spends his time torn between the Investigative Committee and some court hearing involving Rosneft,” he said.

Navalny, who is active in exposing alleged corruption in the government and state corporations such as Rosneft, currently faces two fraud cases pursued by the Investigative Committee.

Navalny claimed the cases are retribution for his whistleblowing activities and him spearheading the anti-Putin drive that resulted in several large-scale rallies in Moscow over the past year. He attended an unsanctioned protest in Moscow on Saturday after the congress and was briefly detained by police.

His opponent Putin used to head the ruling United Russia party for years, but never became a card-carrying member.

The leadership of People's Alliance comprises the head of Navalny’s Anti-Corruption Fund, Vladimir Ashurkov; and the coordinator of Rosvybory project launched by Navalny to monitor elections in Russia, Georgy Alburov.

People’s Alliance pledged in its program to offer a "centrist" take on economy, reform Russia’s judiciary and law enforcements, give more power to the parliament and curb migration.

The party, which was in the works since August, will now focus on establishing branches in the regions, a prerequisite for official registration, which Volkov said is unlikely to be obtained before May.