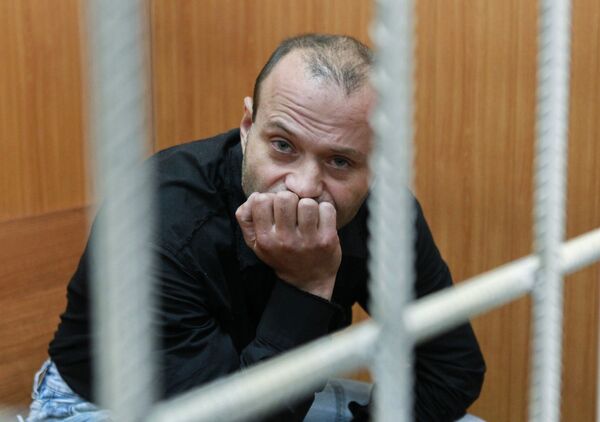 © RIA Novosti . Andrey Stenin
/
Go to the mediabank
Subscribe
International
India
Africa
A Moscow court sentenced a former police officer to 11 years in prison on Friday for his role in the 2006 killing of investigative journalist Anna Politkovskaya.

MOSCOW, December 14 (RIA Novosti) - A Moscow court sentenced a former police officer to 11 years in prison on Friday for his role in the 2006 killing of investigative journalist Anna Politkovskaya.

Dmitry Pavlyuchenkov was convicted in a separate trial from the others accused of involvement in the killing, the mastermind of which remains at liberty.

Politkovskaya, a reporter with opposition-minded Novaya Gazeta newspaper, was shot dead in the elevator of her apartment building on October 7, 2006. Investigators suspect the murder was linked to her work, which frequently produced reports critical of the Kremlin’s policy in the North Caucasus and the leadership in Chechnya.

Pavlyuchenkov, who was a senior police officer at the time of the murder, was found guilty of assisting a criminal group by helping track down Politkovskaya in Moscow and supplying them with a gun.

He agreed a plea-bargain and testified against five other suspects in the case, who are in custody and will be tried separately.

Lom-Ali Gaitukayev is accused of organizing the murder, and hiring three of his relatives – the Makhmudov brothers Rustam, Ibragim and Dzhabrail - and another former police official, Sergei Khadzhikurbanov, to carry out the killing. Rustam Makhmudov is accused of being the man who actually fired the gun.

The organizers received at least $150,000 for the murder, Pavlyuchenkov said.

The lawyer for Politkovskaya’s family, Anna Stavitskaya, said Pavlyuchenkov did not fulfil his plea bargain obligations and should face a harsher punishment. Stavitskaya said she is planning to appeal the verdict and wants the maximum punishment of 18 years.

“I think that it was necessary to end the bargain with the investigators, and he [Pavlyuchenkov] should be tried together with the other suspects, because he didn’t give names of either the mastermind, nor the middlemen,” Sergei Sokolov, deputy editor of Novaya Gazeta, which is holding an independent inquiry, said on Friday.

Two of the Makhmudov brothers, Ibragim and Dzhabrail, and Khadzhikurbanov were tried and acquitted in a jury trial in 2009 on the same charges. Months later the Supreme Court overturned the ruling, while the new investigation into the case was started.