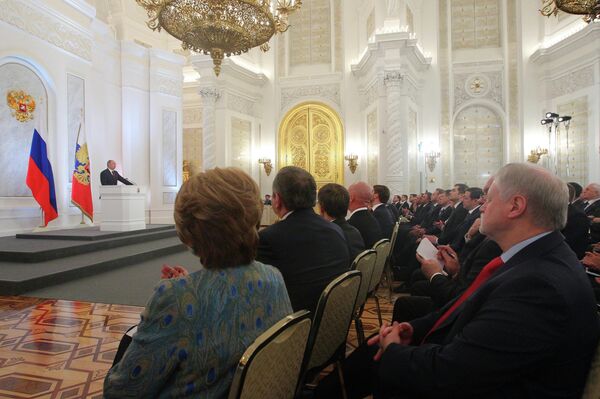 “There should be more of us, and we should be better,” Putin said during his first state of the nation address since being reelected for a third term as president last March.

Putin hailed the country’s return to population growth: "The demographic programs enacted in the past decade are, thank God, working."

Russia's population grew by more than 200,000 people from January to September this year, he said.

However, Putin placed Russia at a critical juncture and warned that failing to tackle the country’s high death rate, especially among men, would have disastrous consequences for the economy and for the country as a whole.

He targeted smoking, drug use, and alcoholism as particular scourges that "prematurely take away hundreds of thousands of our citizens' lives each year."

Putin listed the aggressive promotion of sport as one factor that could help reverse this trend.

The emphasis on a healthy and active lifestyle has long been a central feature of Putin's policies and he has cast himself as a physically fit and able leader. The anti-smoking bill currently under review in the State Duma is just one of the latest initiatives to improve public health.

Putin said “the three-child family should become the norm in Russia,” but that it was important to offer women practical help – creating conditions conducive for them to choose to have more children, in addition to current incentives such as additional payments from the state.

Population decline has been one of the most significant social issues to face Russia since the collapse of the Soviet Union.

The population decreased by about 2 million over the past 10 years, from around 145 million in 2002 to about 143 million in 2012, according to the latest census figures.