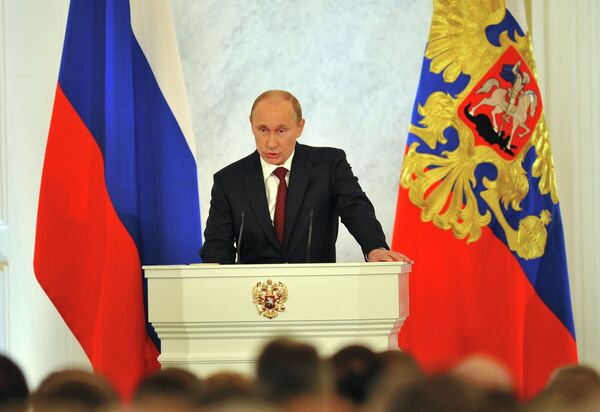 Russian society lacks “spiritual braces” to hold it together, and should look to education and “traditional values” to change that, President Vladimir Putin said Wednesday.

MOSCOW, December 12 (RIA Novosti) – Russian society lacks “spiritual braces” to hold it together, and should look to education and “traditional values” to change that, President Vladimir Putin said Wednesday.

“It pains me to speak of this … but Russian society today lacks spiritual braces – kindness, sympathy, compassion toward one another, support and mutual assistance, a deficit of that which has always, throughout history, made us stronger,” Putin said in his state-of-the-nation address in Moscow.

While government interference in people’s convictions and views smacks of “totalitarianism” and is “absolutely unacceptable,” the state should focus on strengthening society’s “spiritual-moral foundation” through education and youth policy, Putin said.

He instructed the government to prepare a supplementary educational program focusing on “vospitanie” – a Russian cultural concept that refers to preparing young people for adulthood, usually through moral upbringing and conferring rules of etiquette, values and traditions.

In terms of impact on young people, schools are losing to the Internet and electronic media, Putin said, and should restore their “unconditional value” by updating curricula and offering a wide range of electives, accessible to all children regardless of family income.

He also stressed the importance of teaching history and Russian language and emphasized the need to strengthen national identity, in part through connecting “historical epochs into a single whole.” In that vein, Putin proposed creating a memorial to the heroes of World War I and restoring famous tsarist-era military units, including the Preobrazhensky and Semyonovsky regiments, founded by Peter the Great.

While Putin did not explicitly refer to religion during the live broadcast on state television, the camera panned to a group of clerics as he spoke of support for “traditional values.”

“We must wholly support institutions that are the bearers of traditional values and have historically proven their ability to transmit them from generation to generation,” Putin said, without elaborating.

The president also praised grassroots charity activism, which is on the rise in the country, and promised a separate meeting with their volunteers in the unspecified near future.