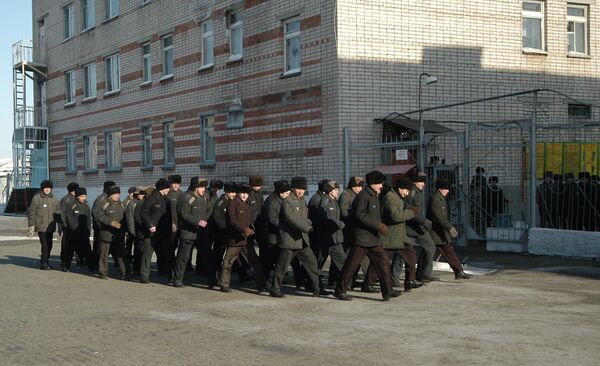 © RIA Novosti . Alexander Kondratyuk
/
Go to the photo bank
Subscribe
A prison in Russia’s Urals region where inmates rioted last month against alleged abuse and extortion was compared to a “concentration camp” on Thursday by a member of the Kremlin’s human rights council.

MOSCOW, December 6 (Marc Bennetts, RIA Novosti) – A prison in Russia’s Urals region where inmates rioted last month against alleged abuse and extortion was compared to a “concentration camp” on Thursday by a member of the Kremlin’s human rights council.

“We saw a splendid park and a beautiful church, marble – but behind the facade there was hell,” Maxim Shevchenko told journalists at a news conference.

“One of the inmates had been spread out on bars, a helmet with speakers was put on his head, and a siren turned on,” he added, speaking after a visit by council members to the prison earlier this week.

Around 500 inmates at Prison Number 6 in Kopeisk, in Russia’s Chelyabinsk Region, rioted on November 25-26 over alleged widespread abuse by prison guards. Eight police officers were injured in the disturbances, during which inmates climbed onto the prison roof and held up a make-shift banner reading “People, help us.”

Riot officers were also reported to have clashed with hundreds of relatives of inmates who had gathered outside the prison.

Kremlin human rights council chief Mikhail Fedotov said Thursday a number of inmates had been held in isolation cells for “months or even years.”

“There was one man who could only crawl,” he added. “His legs didn’t work anymore after being kept in a punishment isolation cell for months.”

The disturbances made headlines across Russia and were the subject of intense online debate by the country's increasingly politicized internet community. Police also made 12 arrests at a November 26 protest against torture in the Russian prison system outside the Moscow headquarters of the Federal Penitentiary Service (FCIN).

“The attention being paid to the abuse in Kopeisk is a great step forward for Russia and another sign that civil society has at last woken up,” veteran human rights activist Lev Ponomaryov told RIA Novosti.

“Four prisoners were killed in this very same prison in 2008 and there was no attention paid to their deaths at all,” he added. “It was as if people thought then this was how things ought to be.”

Investigators have since filed assault charges against five inmates. One prison guard has also been charged with extortion.

“People who complained [about extortion] were beaten,” council member Igor Kalyapin said, adding that “a stream” of complaints to local officials about the alleged abuse had been ignored.

More than 700,000 Russians are currently behind bars. Human rights activists frequently complain of sub-standard living conditions, torture, and disease in the country’s prisons.

The state of Russia’s penal system fell under the international spotlight after the 2009 death in a Moscow pre-trial detention centre of a Sergei Magnitsky, a lawyer who had alleged massive tax fraud by police investigators.

The US Senate is expected to approve later on Thursday a law imposing sanctions on the Russian officials suspected of involvement in Magnitsky’s death.