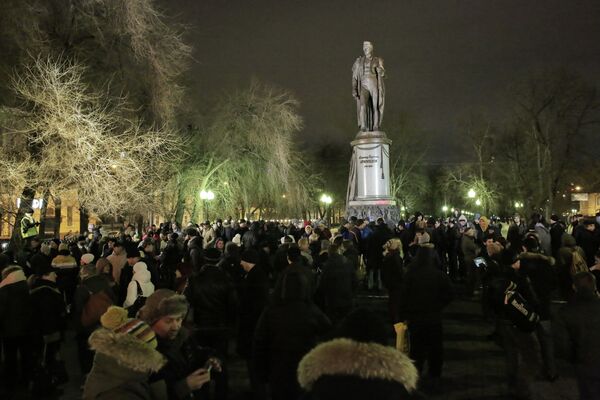 © RIA Novosti . Andrei Stenin
/
Go to the mediabank
Subscribe
International
India
Africa
Around a hundred opposition activists gathered in Moscow on Wednesday evening to mark the first anniversary of the rally that kick-started unprecedented mass protests against the rule of Russian leader Vladimir Putin.

MOSCOW, December 5 (Marc Bennetts, RIA Novosti) - Around a hundred opposition activists gathered in Moscow on Wednesday evening to mark the first anniversary of the rally that kick-started unprecedented mass protests against the rule of Russian leader Vladimir Putin.

“Our country has changed in the past year,” a protest leader, Boris Nemtsov, told activists and journalists. “There are now a lot of proud, free people – many more than the authorities would like.”

But Wednesday’s modest unsanctioned event bore scarce resemblance to the December 5, 2011, landmark protest, which saw a crowd of some 6,000 rally against alleged vote-rigging in favor of Putin’s United Russia party. Police then detained around 300 people – including anti-corruption blogger Alexei Navalny - as the crowd moved towards the HQ of the Federal Security Service (FSB).

The turnout – the biggest ever at that point for an anti-Putin rally – surprised even organizers, who had been concerned that no more than a couple of hundred protesters would attend.

“Protests back then usually drew around 100 people, so I wasn’t entirely sure that we would see a big turnout,” Ilya Yashin, whose Solidarnost movement organized the December 5 rally, told RIA Novosti earlier this week.

“It was pretty clear people were really angry about the polls, but I was afraid this discontent might just stay online,” he added. “Of course, when I arrived and saw how many people had turned up, it was clear this was the start of something.”

Five days later, some 100,000 people, according to organizers’ estimates, packed a central Moscow square to demand a rerun of the polls.

But recent anti-Putin rallies have seen a decline in numbers since police and protesters clashed near the Kremlin on the eve of the ex-KGB officer’s May 7 inauguration for a third presidential term.

“The protests are no longer fun,” said analyst Maria Lipman, of the Carnegie Moscow Center think-tank. “One year ago, people were invigorated by the massive turnout at the protests. There was this feeling of togetherness and euphoria. But now it has become dangerous and risky to go to protests.”

Nemtsov - the only high-profile protest movement leader to make an appearance on Wednesday – was unperturbed by recent speculation that the protests may be running out of steam.

“We are making history here,” he said. “Living history – of course there will be ups and downs. But we have to be patient.”

Police said one person was detained on Wednesday evening. The Novaya Gazeta opposition newspaper said “several people” had been arrested.