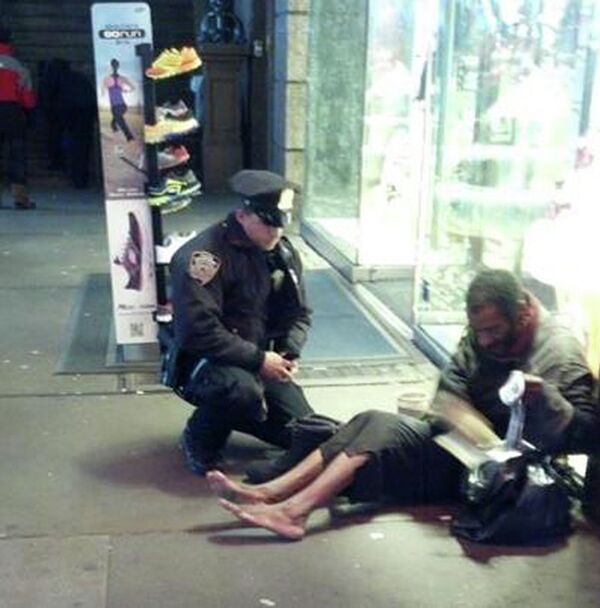 A photo of a New York City police officer helping a barefoot homeless man on a frigid November night by buying him new boots and socks, has gone viral on the web and captured the hearts of thousands for his random act of kindness.

WASHINGTON, November 30 (RIA Novosti) - A photo of a New York City police officer helping a barefoot homeless man on a frigid November night by buying him new boots and socks, has gone viral on the web and captured the hearts of thousands for his random act of kindness.

“The two things that really stuck out in my mind that night was just how cold it was and that this was the most polite gentleman I ever met, and I knew I had to help him,” New York Police Department (NYPD) officer Lawrence DePrimo said Friday on NBC’s “TODAY” show about feeling compelled to buy new boots for a homeless man he saw sitting on the sidewalk near Times Square.

Jennifer Foster, a tourist visiting New York City from the state of Arizona, witnessed DePrimo squatting down on the ground and putting socks and shoes on the homeless man and she said that the “man's face lit up like it was Christmas and like he had been literally given a million dollars," she told the “TODAY” show.

Foster, without DePrimo knowing, took a snapshot of the officer's generosity and sent it to the NYPD, which then posted the picture to its Facebook page where it instantly became a hit and has garnered more than 430,000 likes.

"I knew what I was looking at. I knew it was remarkable," said Foster, who has worked in law enforcement for 17 years as a dispatch manager for a sheriff's office in Arizona.

The 25-year-old police officer was on counterterrorism patrol the night of November 14 when he discovered the homeless man who had blisters on his feet. DePrimo said he stopped and asked the man, "'where's your socks, where's your shoes?' He was like, 'It's OK, officer, I never had a pair of shoes.' "

DePrimo then went to a nearby shoe store and bought the man a pair of socks and $75 boots with his own money and said he keeps the receipt as an "important reminder that some people have it worse."

The officer has found his new fame to be “surreal” and “humbling.”

“It’s a great experience,” he said. “I think it’s a lot about the people, though, because you see such great comments. People are saying that their faith in humanity is restored and that’s the biggest thing that I can take away from all of this.”