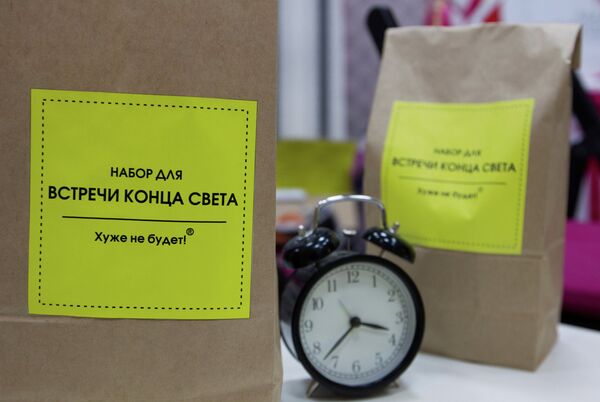 © RIA Novosti . Yakov Andreev
/
Go to the mediabank
Subscribe
International
India
Africa
Concerned citizens now have the opportunity to face the alleged end of the world fully prepared, using an apocalypse kit that went on sale in Tomsk in western Siberia.

MOSCOW, November 26 (RIA Novosti) – Concerned citizens now have the opportunity to face the alleged end of the world fully prepared, using an apocalypse kit that went on sale in Tomsk in western Siberia.

The kit contains a bottle of vodka, a pack of buckwheat, a can of fish, some candles and matches, a notepad and pencil, medication, including heart medicine, and soap and a rope, in an apparent concession to pessimists.

It also contains an ID card to be filled out by hand “in case your ID cards demagnetize” and an instruction card spelling out various games to alleviate apocalypse-related boredom.

The kits – produced, somewhat illogically, by a local bridal party operator – are available in bright yellow and glamorous pink, and cost a modest 890 rubles ($27) apiece.

“We checked the internet, and the only nation to offer such kits was Mexicans,” Shchegolyova said on Sunday.

Shchegolyova added the kit was a joke, but it seemed to have gone over the heads of local officials, who announced plans to ban kit sales over the vodka and the medication, which require special permits to sell, Sostav.ru news website said on Monday.

The end-of-the-world craze is sweeping the former Soviet Union. Last week, free Apocalypse survival courses opened in the Ukrainian city of Simferopol, and concerned Latvians unsuccessfully sought earlier to obtain insurance from the end of the world and the coming of Cthulhu. People across Russia have been reported stealing necessities and trying to weasel out of debts, citing the upcoming demise of the world as we know it.

Current eschatological expectations are based on a 5,000-year-long Maya calendar which has Dec. 21, 2012 as its final date. Various hypotheses about the exact means of delivering the Apocalypse have been voiced, though all were rejected by mainstream scientists.

The last end-of-the-world craze took place in 2011, when American Christian radio host Harold Camping predicted Rapture on Oct. 21 of that year. He was wrong.