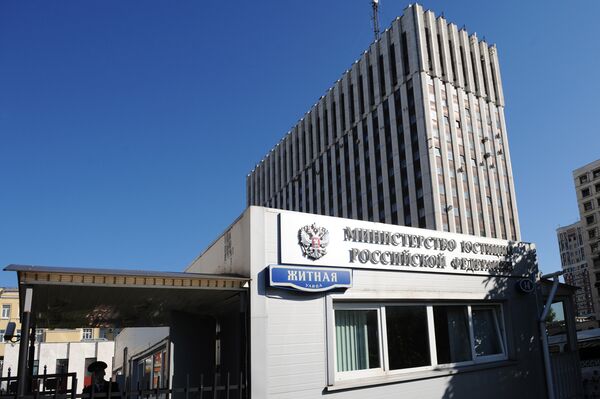 Russia's insistence that NGOs of a "political" nature funded from abroad register as "foreign agents" has been tied down in paperwork - or, rather, the lack of it.

MOSCOW, November 23 (RIA Novosti) - Russia's insistence that NGOs of a "political" nature funded from abroad register as "foreign agents" has been tied down in paperwork - or, rather, the lack of it.

The NGOS affected by the controversial law were required by law to register their new legal status with the Justice Ministry by November 21, but the form for them to do has not yet been prepared, the ministry said in a statement on Friday.

The Justice Ministry's website already has a register of NGOs that meet the "foreign agent" definition. Many of the links on the website are not yet active, however.

Russian President Vladimir Putin signed the law in July amid protests from NGOs who said the term "foreign agent" is a near synonym in Russian for "spy" and would discredit them in the eyes of the public. Putin has slammed foreign-funded NGOs in the past as "jackals."

The law has also been criticized by Russian human rights organizations, who say it is just one of a number of recent Kremlin-backed laws aimed at suppressing opposition to Putin's rule.

The country’s oldest rights organization, the Moscow Helsinki Group, has said it will close down its offices rather than comply with the new law. Not a single "political" NGO has said it will register as a "foreign agent."

Russia’s Public Chamber refused to support the bill, which was also criticized by the Kremlin’s own rights council.

Putin has repeatedly claimed that Washington is using NGOs in Russia as a cover to bring about political change.

The author of the bill, United Russia deputy Alexander Sidyakin, denied in an exclusive interview with RIA Novosti earlier this year that he had been prompted by Kremlin officials to propose the law.

He also said he saw "nothing insulting" in the term "foreign agent."