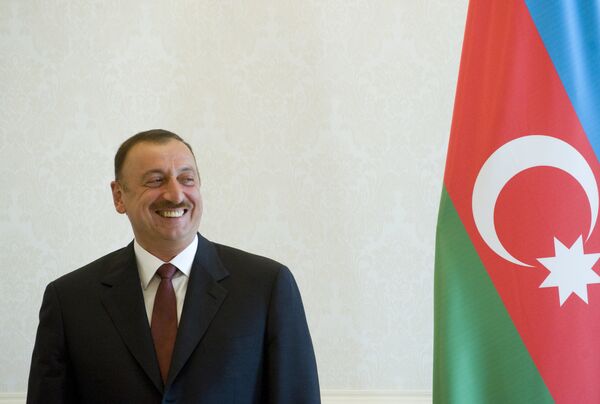 © RIA Novosti . Sergey Guneev
/
Go to the photo bank
Subscribe
Heads of state across the world have long since embraced Twitter as a means for communication with the masses.

MOSCOW, November 20 (Dan Peleschuk, RIA Novosti) – Heads of state across the world have long since embraced Twitter as a means for communication with the masses.

But few, it seems, have taken to it as voraciously as Azerbaijani President Ilham Aliyev, who used the social network on Tuesday to unleash a barrage of disparaging tweets against Armenia, the predominantly Islamic country’s bitter rival.

“Armenia as a country is of no value,” Aliyev tweeted from his official handle, @presidentaz. “It is actually a colony, an outpost run from abroad, a territory artificially created on ancient Azerbaijani lands.”

He added that his country would “continue to expose Armenia’s aggressive policy in all international organizations.”

The comments appeared at first to be aimed at domestic consumption. The tweets were excerpts taken from a November 16 speech he gave at a meeting of the ruling New Azerbaijan Party, which was celebrating its 20th anniversary, according to Aliyev's official website.

While Aliyev also hailed in the speech what he said was Azerbaijan's positive development, his multitude of comments on Armenia were the first to be broadcast over Twitter.

"I have often talked about it, I want to say it again without fearing anyone – our enemy is the Armenian lobby," Aliyev added.

Armenia and Azerbaijan have been bitter enemies since the Russian Civil War, in which inter-communal massacres by both sides took place in Baku and elsewhere.

Their recent mutual enmity is rooted in a dispute over the breakaway majority ethnic-Armenian republic of Nagorno-Karabakh, which declared independence in 1992 but remains internationally recognized as part of Azerbaijan.

The territory was the subject of a brutal war between the two countries in the early 1990s that left more than 30,000 dead and drove out most of the non-Armenian population. Both sides have regularly violated the shaky 1994 ceasefire, with low-intensity border incidents and sniper attacks now commonplace.

More recently, a military build-up in both Armenia and Azerbaijan has led observers to fear another outbreak of large-scale violence may be imminent.

“Azerbaijan grows stronger and more powerful by the year, while Armenia weakens and declines every year,” Aliyev claimed on Tuesday.

As international powers have unsuccessfully sought a solution to the frozen conflict – particularly in the form of the Minsk Group, organized by the Organization for Security and Cooperation in Europe (OSCE) – officials from both Armenia and Azerbaijan have continued to trade barbs amid the heightened tension in recent months.

Recently, the Nagorno-Karabakh authorities threatened to re-open an airport in the self-declared republic's capital of Stepanakert, attracting sharp criticism from Azerbaijani officials.

“We will continue our efforts to isolate Armenia,” Aliyev said, his Twitter page adorned in a blue sunburst and emblazoned with the motto “We turn initiatives into reality!”

“This policy is working,” he added. “We see its results.”