US Lawmakers May Scrap Jackson-Vanik by Yearend – McFaul 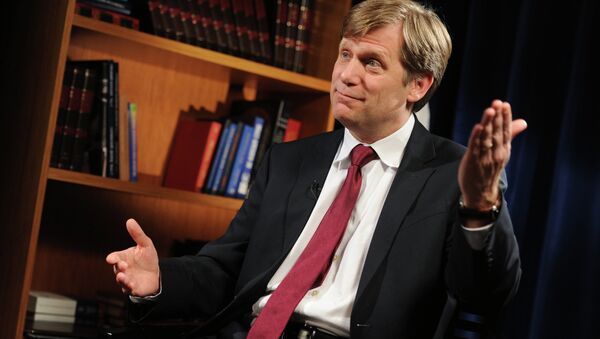 © Sputnik / Alexei Filippov
/
Go to the photo bank
Subscribe
The Cold-War era Jackson-Vanik Amendment, which imposes trade restrictions on Russia, could be abolished by January 2013 as more and more US politicians realize the importance of this step, US Ambassador to Russia Michael McFaul said.

MOSCOW, November 8 (RIA Novosti) – The Cold-War era Jackson-Vanik Amendment, which imposes trade restrictions on Russia, could be abolished by January 2013 as more and more US politicians realize the importance of this step, US Ambassador to Russia Michael McFaul said.

“More and more people in the United States agree that this must be done,” McFaul said in an interview with Ekho Moskvy radio on Wednesday. “Let’s hope it will happen before January [2013].”

“However, there is still a big group of people who would like to link the scrapping of Jackson-Vanik issue with the adoption of the Magnitsky list,” the diplomat said.

The amendment, named after Congressmen Henry M. Jackson and Charles Vanik, was introduced in 1974 to restrict trade with the Soviet Union and other non-market economies until they allowed free emigration.

The restrictions imposed by Jackson-Vanik have been waived every year since 1989, but the amendment itself remains in place and is a thorn in the side of Russia-US relations.

In July, the United States Senate Finance Committee approved a bill linking the abolishment of the Jackson-Vanik Amendment and a measure aiming to punish Russian officials involved in the death of Russian lawyer Sergei Magnitsky.

A probe into his death revealed that the lawyer, who was suffering from untreated pancreatitis and a heart condition, did not receive proper medical treatment in prison. Rights activists pointed to multiple violations of his rights during his arrest and in detention, including signs that he was beaten by prison guards hours before his death.

Russia insists that the two issues must not be tied together.

Russian lawmakers expressed hope earlier on Wednesday that Washington would fulfill its long-standing promise to abolish the Jackson-Vanik Amendment in the near future as US President Barack Obama, who was reelected for the second term on Tuesday, has always supported the scrapping of this restrictive legislation.

“This would be a good start for Barack Obama’s new presidential term,” said Konstantin Dobrynin, a member of the constitutional legislation committee at the upper house of the Russian parliament.