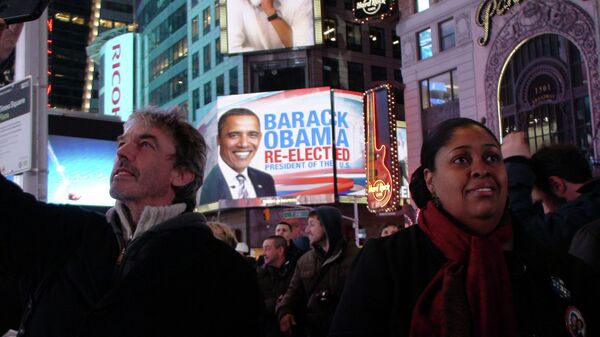 Critics at home had taken aim at Republican challenger Mitt Romney for what they said was his aggressive foreign policy, particularly toward traditional US rivals such as Russia and Iran.

Romney’s now-famous campaign comment that Russia is the United States’ “number one geopolitical foe” raised eyebrows in the Kremlin and drew criticism from commentators who had hailed the US-Russian “reset” policy as a success.

But after Obama’s midnight election victory, many leading figures in Russia seemed to breathe a sigh of relief.

“For Russia, Obama’s victory will be beneficial,” said former aide to President Vladimir Putin and Public Chamber member Sergei Markov, adding that the reelected president “does not have as many Russophobic advisors” as Romney.

Prime Minister Dmitry Medvedev added that he was "glad" the victor was "not someone who considers Russia enemy number one."

While the US-Russian “reset” received mixed reviews, it was broadly seen as an improvement in relations between the two countries, which had soured during former President George W. Bush’s tenure.

Russian Foreign Minister Sergei Lavrov told Moskovskie Novosti on Wednesday that Moscow is willing to “go as far as the American administration is ready to go.”

Lavrov has spoken out in recent months against US calls for Syrian President Bashar al-Assad’s ouster, amid a bloody civil war between government and anti-Assad rebel forces.

Former Finance Minister and longtime Putin ally Alexei Kudrin, meanwhile, tweeted about the need for a “real” reset in relations between Russian and the United States.

Kudrin was thought to have fallen out with the Kremlin after his removal by then-President Dmitry Medvedev last year, though his many years of service to Putin has cemented him as a reliable and authoritative voice on the Russian political scene.

“Obama’s victory means that there will not be…an obvious enemy of Russia in the White House,” he tweeted Wednesday morning, referring to Bush’s perceived anti-Russian stance.

The ruling United Russia party on Wednesday said that Russia will continue its “strategic partnership” with the United States.

First Deputy Speaker of the Federation Council Alexey Torshin, who served as an independent observer in the election, said that Obama’s victory will not have any significant impact on the US-Russian relationship.

He added that the vote was particularly important as it was “a choice not between two candidates, but between two ideologies.”

Some Russian experts said Obama’s predictability is a key asset to the future of US-Russian relations.

“For Moscow, this is a partner we know well – we know his capabilities, as well as the limitations of his capabilities,” said Sergei Oznobischev, director of the Institute of Strategic Assessments in Moscow.

US Ambassador to Russia Michael McFaul, for his part, was among the first in Russia to congratulate Obama on his victory.

McFaul, earlier Obama’s special advisor on Russia, is the architect of the “reset” policy and has been the target of criticism from the Kremlin and other Russian sources for his perceived wielding of foreign influence in Russia’s domestic affairs.

Others, however, were less than positive.

Firebrand nationalist politician Vladimir Zhirinovsky, leader of the Liberal Democratic Party of Russia, said America has “doomed itself to stagnation.”

“This is the beginning of a journey to self-isolation for the United States,” he said Wednesday on Kommersant FM radio.

Zhirinovsky, known for his outspoken rhetoric, has long criticized the US for its alleged imperialism.

For the Communist Party of Russia, meanwhile, either outcome would have led to continuing tensions with Russia, party leader Gennady Zyuganov said in a statement.

"They look at our country as a territory that lost the Cold War and will continue to interfere with our domestic affairs, attempting to dictate terms and draw us into all sorts of adventures," Zyuganov said.

He told RIA Novosti he was among the minority in the non-systemic opposition that backed Obama’s reelection, pointing to what he said was the movement’s hope in Romney’s tougher stance against Putin and alleged political and human rights violations.

“There’s this general great hope that the US can do something about Russia which will finally help us get rid of Putin,” he said. “But I’m a realist and pragmatist, and I don’t think there’s ever anything that the United States can really do to change the domestic situation here – it’s our job.”

But Obama’s victory wasn’t the only topic on observers’ minds.

Some among Moscow’s intelligentsia took aim at the US Electoral College, which has drawn as much criticism as praise from political observers in recent years.

Obama’s sweep of electoral votes arrived despite a mere 2 percent margin between the two candidates. As of midday Wednesday, Obama appeared to have secured about 50 percent of the popular vote to Romney's 48 percent. Obama, however, won 303 electoral votes to Romney’s 206.

A win requires that a candidate receive 270 electoral votes.

“The system of unequal representation among states is certainly lamentable, and does not protect citizens’ rights to vote,” wrote media commentator and social activist Oleg Kozyrev on his Twitter feed.

Numerous Russian civic and government groups were dispatched to the United States to serve as election observers.

A controversial report commissioned by Russia's Central Election Commission and released on the eve of the vote concluded that the presidential election would be neither free nor fair.

But Torshin, the Federation Council deputy speaker, reported no major electoral violations during his visit.