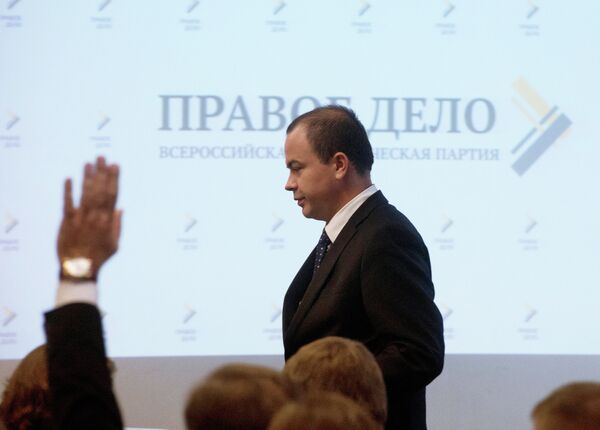 © RIA Novosti . Ilja Pitalev
/
Go to the mediabank
Subscribe
International
India
Africa
Russia’s Right Cause opposition party is preparing to take a fresh political course next week that could see it adopt a new name, ideology, and place in Russian politics, its leader said on Saturday at a party congress.

MOSCOW, November 3 (RIA Novosti) – Russia’s Right Cause opposition party is preparing to take a fresh political course next week that could see it adopt a new name, ideology, and place in Russian politics, its leader said on Saturday at a party congress.

“As a result of the resolution at today’s session, we have decided to discuss a new ideology, new position. It is entirely possible the description of our ideology could be conservative, and even national-patriotic,” the party’s leader Andrei Dunayev said.

All will depend on what position its members support at the next session of the party congress due on December 15, he said. “A name change is possible,” he said.

“Those people are returning to us who were the source of the rightist parties in the 1990s, and some of them could want to take positions in the leading bodies of the party,” he added.

The party’s manifesto set out in a party congress resolution on Saturday calls for Russia to be a parliamentary republic.

“We call for a fundamental change to the division of power between presidential power and parliament. No change in personalities in authority, or opposition, will get results. Only the generally publicized demand for a transition to a parliamentary republic, as a form of government, can save the country from catastrophe,” the party resolution said.

The party was set up in 2008 as aresult of the merger of several small right wing parties, including the Democratic Party of Russia and Union of Right Forces. It was officially registered in spring 2011.

The party’s support crumbled in September that year after a schism caused when a faction of members voted to oust billionaire Mikhail Prokhorov as leader.

Prokhorov, who had only led the party since June that year, accused Kremlin insiders of fomenting the split in the run-up to the December parliamentary elections, and called on his supporters to follow him into a new party.

Prokhorov announced in October this year he had joined the Civic Platform party he founded in July and would henceforth engage in politics full time.