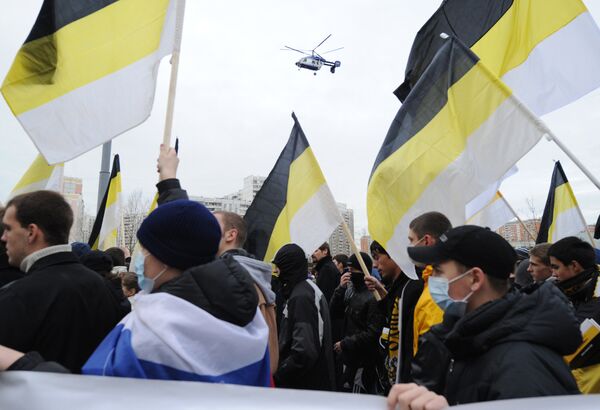 Moscow City Hall has permitted 20,000 nationalists to stage an annual Russian March rally in a city suburb on Sunday, despite earlier objections.

The rally will take place in the Lyublino district in the city’s southeast, which housed several previous installments of the Russian March, city official Alexei Mayorov said on Tuesday.

Three different groups applied with the Moscow authorities this year to organize the Russian March in three different locations across the city.

City Hall initially proposed to only sanction a 7,000-strong rally, but eventually convinced two organizing groups to merge their bids and settle for Lyublino, Mayorov said.

A separate rally staged by second-tier nationalist leader Sergei Baburin was permitted to take place in downtown Moscow on the same day, he said.

The rally, held on Unity Day on November 4 since the holiday’s inception in 2005, is the main public event of the year for various nationalist and rightwing groups, which are numerous, but extremely fractured in Russia.

Last year’s event gathered between 5,000 and 25,000, according to various estimates, and was graced by opposition darling Alexei Navalny, a self-proclaimed moderate nationalist who said he wanted to make nationalist ideas part of the political mainstream and not the domain of fringe radicals.

Thirteen percent of Muscovites would support a new nationalist party, were it created and allowed to run in the legislative elections in the city, a poll by Levada Center showed earlier in October. Support for such a hypothetical party averaged 7 percent nationwide, according to the poll, which covered 500 respondents in Moscow and 1,000 people in five other major cities and had a margin of error of 7 percentage points.