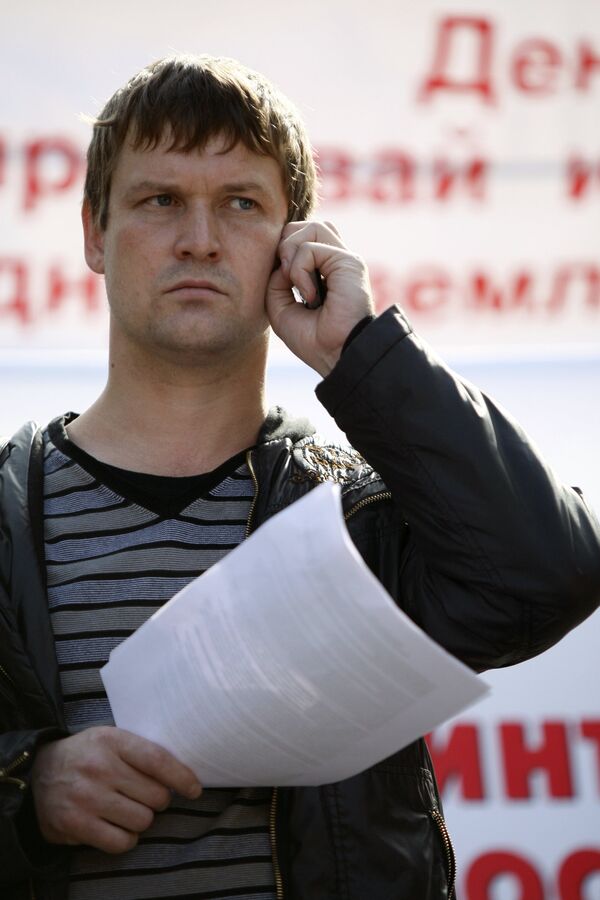 © RIA Novosti . Alexey Kudenko
/
Go to the photo bank
Subscribe
A Russian opposition figure who is under arrest on charges of plotting mass disorder claims he confessed because his interrogators threatened to harm him and members of his family, a representative of a rights group told RIA Novosti on Tuesday.

A Russian opposition activist who is under arrest on charges of plotting mass disorder said on Tuesday he confessed because his interrogators threatened him and members of his family, a representative of a rights group told RIA Novosti on Tuesday.

“Razvozzhayev said that in the basement of a residential building, presumably near West Russia's Bryansk Region, he was forced to sign a confession under the threat of receiving a shot of truth serum, and after threats to the life and health of himself and those closest to him,” Karetnikova said.

“They subjected him to psychological pressure. They said he would disappear if he refused to sign a confession, that no one knew where he was, that they would kill his children,” Karetnikova also told the lenta.ru news website.

She also said his lawyer, Violleta Volkova, had not been allowed access to him.

Zoya Svetova, another rights worker who visited Razvozzhayev, told the online Dozhd TV channel that the “masked men” who had held him gave him no food or water for three days and refused to allow him to visit the toilet.

A spokesperson for Russia’s Investigative Committee said on Monday that Razvozzhayev had turned himself in to its Moscow office and confessed to plotting mass riots across the country.

Razvozzhayev, who strenuously denied the charges against him in a blog post last week, had vanished from Kiev on Friday after seeking political refugee status at the United Nations High Commissioner for Refugees in Kiev, his lawyer, Violetta Volkova, said.

Razvozzhayev told the rights activists the confession was false and that when he attempted to avoid incriminating other opposition figures, the text was dictated to him.

He is unable to identify his captors. “They were wearing masks and they also pulled his cap down over his eyes,” she said.

Following his arrest last week, footage posted by the online Life News website appeared to show Razvozzhayev saying he had been tortured.

“They tortured me for two days, they kidnapped me in Ukraine,” he shouted to journalists, as officers bundled him out of a Moscow courthouse and into a police vehicle.

Investigation Committee spokesman Vladimir Markin denied Razvozzhayev had been subjected to either physical or psychological pressure, and that he had been in his “right mind” when he signed the ten-page confession.

“I don’t know what he told journalists,” he said.

Russia’s human rights ombudsman Vladimir Lukin said in a statement on Tuesday that Razvozzhayev had told him he had not been tortured “in his pre-trial detention center cell” at Moscow’s Lefortovo prison. Lukin’s secretary said the ombudsman would make no further comment on his visit when contacted by RIA Novosti.

These charges come just over a week after pro-Kremlin NTV channel aired what it said was secretly-filmed footage of  Razvozzhayev, Left Front leader Sergei Udaltsov, and Left Front activist Konstantin Lebedev meeting leading Georgian politician Givi Targamadze in the Belarusian capital Minsk to discuss plans to seize power in cities across Russia, including the Baltic exclave of Kaliningrad.

All three men have been charged, and Lebedev was also taken into custody last week. Udaltsov, a fiery shaven-headed leftist who has led protests against the almost 13-year-rule of Vladimir Putin, was released on a pledge not to leave Moscow.

Udaltsov says the footage is fake and the charges against him are “lunacy.”