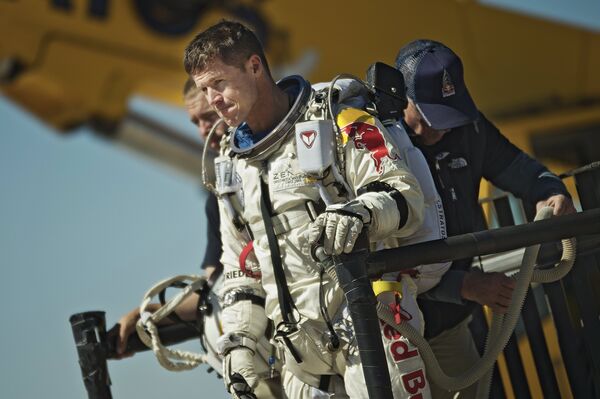 © Photo : Jörg Mitter/Red Bull Content Pool
Subscribe
An Austrian daredevil’s attempt in the United States on Tuesday to make the highest ever skydive to Earth and break the sound barrier was hampered by strong winds for a second day in a row.

An Austrian daredevil’s attempt in the United States on Tuesday to make the highest ever skydive to Earth and break the sound barrier was hampered by strong winds for a second day in a row.

With news agencies monitoring and live-blogging the event, television cameras showed the flight capsule’s 55-story balloon being windblown in the New Mexico desert as it was preparing to launch extreme athlete Felix Baumgartner 23 miles (37 kilometers) in the air.

“It’s all about what we do now and accomplish now. We’ve made it so far, there’s no way turning back,” Baumgartner said on Twitter.

The 43-year-old former military parachutist was gearing up for a three-hour ascent into the stratosphere in the fiberglass capsule that is designed to take him to the edge of space.

If all goes well with the third launch attempt tentatively scheduled for Thursday morning, Baumgartner will leap out of the capsule and dive down at a speed of nearly 700 mph (1,127 kph), on his way to shattering five world records, which include the first human free-fall to break the sound barrier and the highest manned balloon flight in history.

Baumgartner’s balloon is supposed to take off from a field near an airport in Roswell, New Mexico, a town that until now had best been known for a rumored 1947 UFO landing.

Once he reaches the edge of space and goes into free-fall, he will come back to Earth in just a little over five minutes. Baumgartner will be making his descent in a specially pressurized and parachuted suit that is designed to protect him from unconsciousness and even death.

The former paratrooper, known as “Fearless Felix,” has parachuted off buildings and mountains and once into a 600-foot-deep cave, according to The Guardian. He has already done two practice free-falls this year, the highest at more than18 miles in the air.

Among the risks that Baumgartner faces is that any tear to his pressurized suit could expose him to a lack of oxygen and to temperatures as low as 70 degrees fahrenheit below zero. He could also spin out of control on his way down.

The American energy drink maker Red Bull is sponsoring the supersonic jump and has been promoting a live Internet stream of the event from nearly 30 cameras on the capsule, the ground and a helicopter.

Organizers reportedly said there will be a 20-second delay in the in case of a tragic accident.

Baumgartner’s stunt team will be in constant communication with him and will monitor his oxygen levels throughout the event.

In addition to breaking world records, Baumgartner’s dive is expected to provide scientists with valuable information for future state-of-the-art spacesuits and techniques that could help astronauts survive accidents.