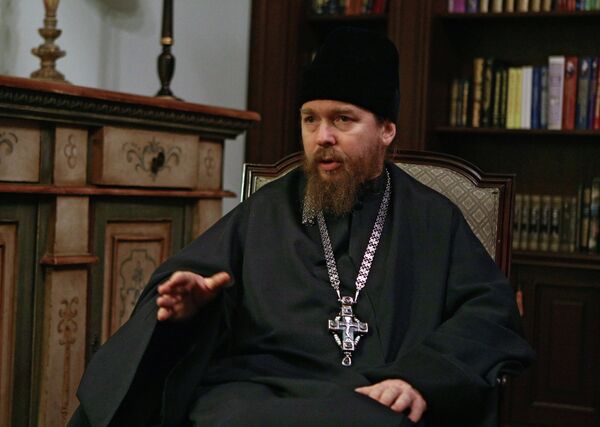 © RIA Novosti . Georgy Kurolessin
/
Go to the photo bank
Subscribe
Russia does not need laws to protect the feelings of religious believers, but the power of the state should be deployed to defend the country against acts of “spiritual terrorism,” a senior official with the Russian Orthodox Church said Friday in an interview.

Russia does not need laws to protect the feelings of religious believers, but the power of the state should be deployed to defend the country against acts of “spiritual terrorism,” a senior official with the Russian Orthodox Church said Friday in an interview.

“We need clear, succinct laws in order to defend both religious and civilian sanctity from malicious abuse, which, in my opinion, is nothing less than spiritual terrorism,” said Father Tikhon, the executive secretary of the Russian Orthodox Church’s Patriarchal Council for Culture. “Believers’ feelings, in my opinion, need no protection other than from the Lord himself.”

The bill came in the wake of Russia’s imprisonment of three women from the art collective Pussy Riot for performing a “punk prayer” criticizing President Vladimir Putin in a Moscow cathedral in February. Nadezhda Tolokonnikova, Yekaterina Samutsevich, and Maria Alyokhina were convicted of aggravated hooliganism and sentenced to two years in prison.

The saga has sparked international outrage, with foreign governments criticizing the punishment as excessive and music stars like Madonna and Paul McCartney publicly expressing their support for the three women.

Father Tikhon, who spoke Friday after a presentation of the English-language version of his book “Everyday Saints and Other Stories” at the Library of Congress in Washington, conceded that by taking a hard line against incidents like the Pussy Riot performance, the church may be courting similar provocations.

“But if these jokers are going around desecrating crosses and churches, dancing on altars, and defiling museums left and right, and everyone just shuts their mouths and thinks it will go away, that won’t work either,” he said.

Father Tikhon, who serves as the abbot of the Sretensky Monastery in central Moscow, suggested Russia might consider implementing punishments similar to those in Israel, where anyone convicted of desecrating a holy place can face up to seven years in prison.

Father Tikhon is widely rumored to be Putin’s spiritual adviser, though he declined to comment when an audience member at Friday’s presentation asked about his relationship to “someone in the Kremlin.”

“There’s no point in discussing rumors,” he said.

The release of “Everyday Saints and Other Stories” in the United States comes amid celebrations of the five year anniversary of the reconciliation of the Moscow Patriarchate and the Russian Orthodox Church Outside of Russia.

The festivities include a 20 day, nine city tour across the United States by the all-male Sretensky Monestary Choir, which performed two songs at the presentation of Father Tikhon’s book Friday.