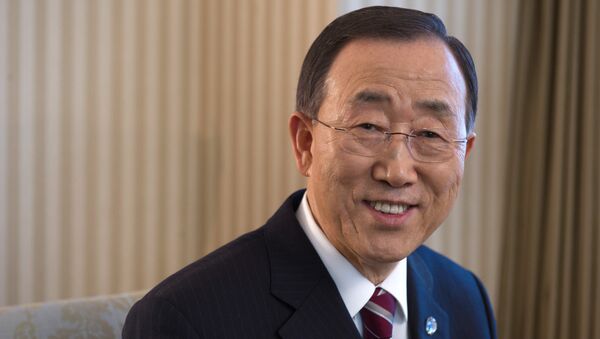 UN Secretary-General Ban Ki-moon said on Friday that the world urgently needs a culture of peace to tackle the deadly effects of war, discrimination, xenophobia, terrorism and human rights abuses.

UN Secretary-General Ban Ki-moon said on Friday that the world urgently needs a culture of peace to tackle the deadly effects of war, discrimination, xenophobia, terrorism and human rights abuses.

“To fundamentally tackle the roots of conflict, we need to promote an understanding of our common humanity. We need a culture that upholds human dignity and human life,” Ban said in his remarks to an opening session of the General Assembly High-Level Forum on the Culture of Peace.

The UN chief said that the world spends almost twice as much on weapons in one day as the United Nations spends on its global mission of peace, human rights and development in one year.

“That is an enormous cost to people who go to bed hungry … children who die because they lack clean water… farmers who cannot cultivate land because it is polluted by mines,” he stressed.

Ban called the spiraling military spending “a moral outrage” and reiterated his determination to make disarmament a key priority on the UN’s five-year action agenda.

“People intuitively understand that there can be no military solution to conflicts … that the world’s scarce resources should be spent to help people flourish, not to fund weapons that cause more suffering,” he said.

Global spending on weapons totals more than $1.7 trillion, according to the latest report by the Stockholm International Peace Research Institute (SIPRI).

The United States remains by far the biggest military spender, with a defense budget amounting to $711 billion last year. It is followed by China and Russia, which in 2011 spent an estimated $143 billion and $72 billion on arms, respectively.