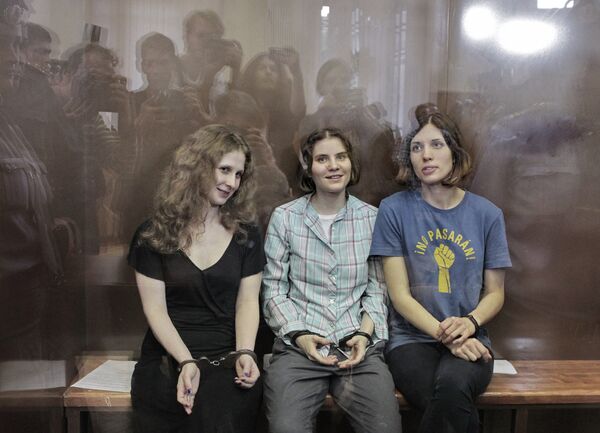 Russian President Vladimir Putin said on Wednesday that he was “staying out” of the controversial case of three members of the Pussy Riot punk group jailed last month over a protest in Moscow’s largest cathedral.

Russian President Vladimir Putin said on Wednesday that he was “staying out” of the controversial case of three members of the Pussy Riot punk group jailed last month over a protest in Moscow’s largest cathedral.

“I know what’s going on with Pussy Riot, but I am staying out of that,” Putin told RT TV in an interview.

Nadezhda Tolokonnikova, 22, Maria Alyokhina, 24, and Yekaterina Samutsevich, 30, were sentenced to two years each by a Moscow court on August 17 after being found guilty of “hooliganism aimed at inciting religious hated.”

The decision sparked protests outside the court and sharp international condemnation. Opposition figurehead Alexei Navalny said after the ruling that Putin had “written the verdict.”

Alternately high-kicking and crossing themselves in the Christ the Savior Cathedral, where Russia’s leaders traditionally celebrate religious holidays, Pussy Riot performed a raucous and atonal “punk prayer” that urged “Mother Mary” to “drive Putin out” in late February.

Lawyers for Pussy Riot had said the performance was not anti-religion and was a response to Orthodox Church support for Vladimir Putin ahead of the March presidential polls that returned the former KGB officer to the Kremlin.

Orthodox Church head Patriarch Kirill had said some two weeks before the cathedral protest that Putin’s first two presidential terms were a “miracle of God.” His comments came amid the largest anti-government demonstrations in modern Russia’s history.

Putin said before the trial that he hoped the court would not judge the women “too harshly,” a comment that sparked a wide range of interpretations. The maximum possible sentence for the charges was seven years. Prosecutors had asked for three years for each of the defendants, two of whom have small children.

The aftermath of the Pussy Riot trial has seen a rise in tensions between supporters and critics of the powerful Orthodox Church.

A number of wooden crosses have been chopped down in Russia’s regions since the court ruling by a shadowy group who said the act was “revenge” for the jailing of the group members. A senior Moscow priest, Dmitry Smirnov, said the act amounted to a “declaration of war” against the Church.

The Pussy Riot row has also sparked a rise in Orthodox militancy, with fringe groups announcing plans to patrol near churches to protect them from “desecration.” In recent high-profile incidents in Moscow, Orthodox activists in Moscow tore a Pussy Riot T-shirt off a member of the public and harassed staff at a downtown museum of erotica. In a further indication of religious strife a suspected drug user was found murdered last week with an Orthodox religious icon placed on his face in St. Petersburg, investigators said.

And when the bodies of two women were found dead last week in their apartment in Russia’s republic of Tatarstan under the words “Free Pussy Riot!” scrawled in blood, pro-Kremlin tabloids accused the group’s supporters of the murders. The suspect later confessed to have written the words in attempt to throw police off his trail.