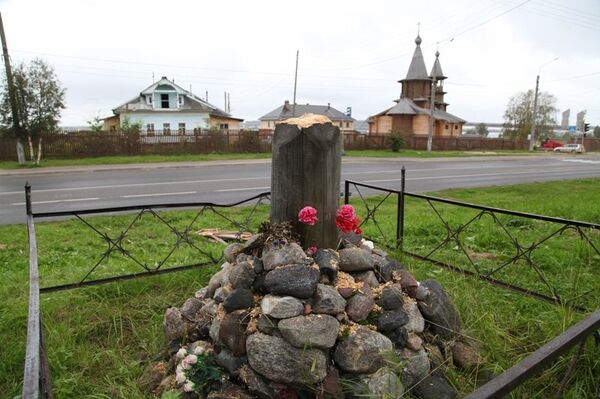 Four wooden crosses were chopped down by unknown vandals in Russia over the weekend, in what the Orthodox Church claimed was a campaign to sow religious hatred.

Four wooden crosses were chopped down by unknown vandals in Russia over the weekend, in what the Orthodox Church claimed was a campaign to sow religious hatred.

Unknown men were seen chopping down a crucifix in the northern Arkhangelsk region on the night of August 25, while another three crosses were found cut to pieces near Chelyabinsk in the southern Urals.

No-one has claimed responsibility for the action, which comes just days after activists from Ukrainian women's rights group Femen cut down a crucifix in the capital Kiev, in a show of solidarity with three members of the all-female punk group Pussy Riot, who were sentenced to two years in jail for "religious hatred" for singing an anti-Putin protest song in Moscow's largest church in February.

Femen threatened to carry out similar attacks on crosses across Russia, saying on Russia Today TV their chainsaw attack on the cross - a "Trash Prayer" - was a "warning" to President Putin and Patriarch Kirill that Femen would come after "the jerks responsible for their [Pussy Riot's] suffering with a chainsaw."

The Church has called for the offenders to be punished, but did not appear to link the latest incidents with the Femen protest.

"Those destroying these symbols are attempting to sow hatred between people," Arkhangelsk Metropolitan Daniil said.

The Chelyabinsk diocese said such incidents "put at risk the social peace, calm and welfare" of local people.

Russian human rights ombudsman Vladimir Lukin has condemned the cross attacks and demanded the offenders offer an explanation for their "senseless actions," in comments carried by state-run television.