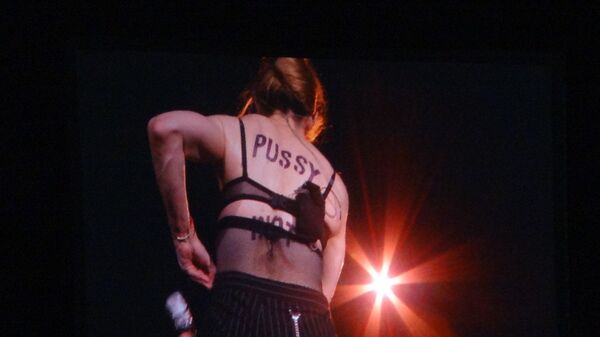 “Every ex-wh*** tends to lecture. Especially during tours and concerts,” Deputy Prime Minister Dmitry Rogozin wrote in his Twitter blog.

Madonna wore the group’s trademark balaclava and stripped to her bra to reveal the words “Pussy Riot” during a concert in Moscow on Tuesday.

"I mean no disrespect to the church or the government, but I think that these three girls -- Masha, Katya, Nadya -- have done something courageous, have paid the price for their act, and I pray for their freedom,” the veteran pop diva told the audience.

Prosecutors asked this week for three years for three members of the Pussy Riot group, who were detained after performing a protest song calling on the Virgin Mary to “drive Putin out” in Moscow’s largest cathedral in February. The ten-day trial ended on Wednesday and the verdict will be announced on August 17.

Madonna is just one of a growing number of cultural figures, both Russian and Western, to have called for Pussy Riot to be freed.

Madonna was also called a "foreign whore" by prominent Russian Orthodox Church theologian, Archdeacon Andrei Kurayev, in 2008 ahead of a concert in Moscow.

Kurayev defended the use of the word by saying it comes from Church Slavonic and is often used in liturgical texts. "The primary meaning of the word is 'to err,'” he said.

Madonna is due to give a concert on Thursday evening in St. Petersburg. She has pledged to speak out against a ban on so-called “gay propaganda” imposed by the city’s authorities during the gig.