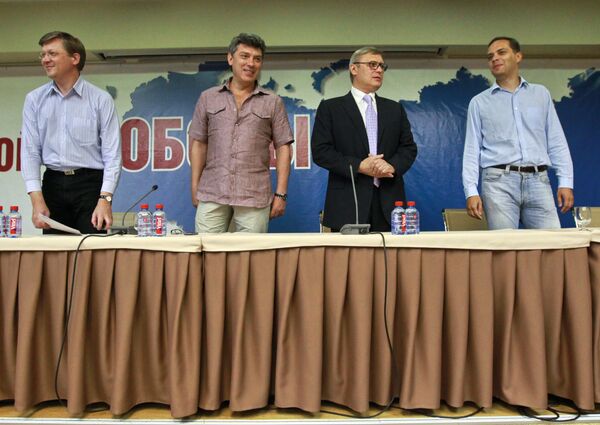 The new party - which was created after a merger during the wave of recent anti-Kremlin protests - could allow some of Russia’s most well-known liberal opposition leaders to once again contest elections.

Boris Nemtsov – one of Vladimir Putin’s most fierce critics, former Prime Minister Mikhail Kasyanov, Vladimir Ryzhkov and Vladimir Milov agreed to set up Parnas in 2010. The party’s co-chairs – each of whom led their own political movement – decided to create the coalition in order to increase the chance of right-wingers being elected to the State Duma.

The new party’s political council will be headed by Ryzhkov, a former Duma deputy, with Mikhail Shneyder in the post of executive director. Ryzhkov also leads the Republican Party, which was created in 1990 and banned by the Supreme Court in 2007, after the government introduced new rules tightening up procedures for registering Russian political parties.

In early April, the Kremlin eased requirements for the registration and operation of political parties. Under the new rules, just 500 signatures are needed to register a party, down from the 40,000 required in the past.

The Justice Ministry refused to register Parnas ahead of parliamentary elections last December, citing shortcomings in its charter and falsification of party members’ signatures. The party appealed the decision in court but lost the case.

The Republican Party was re-registered following a decision by the European Court of Human Rights in May 2012. A month later, Ryzhkov’s party merged with the then-unregistered Parnas. The founding convention approved the new entity’s name, the Republican Party of Russia – People's Freedom Party, and its program.