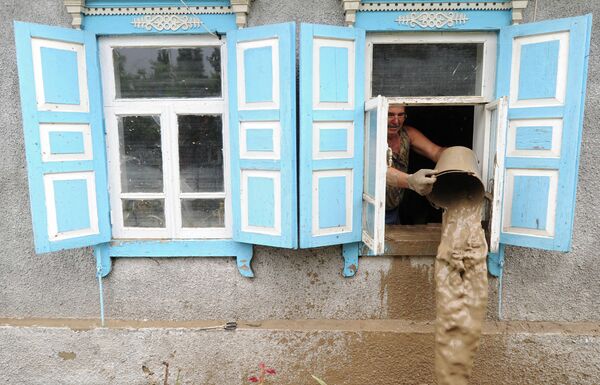 A journalist employed at Russia’s Emergencies Ministry radio station has alleged that he and several of his coworkers were forced to quit over "inappropriate" coverage of flooding in Southern Russia and criticism of the Orthodox Church, Kommersant daily reported on Monday.

A journalist employed at Russia’s Emergencies Ministry radio station has alleged that he and several of his coworkers were forced to quit over "inappropriate" coverage of flooding in Southern Russia and criticism of the Orthodox Church, Kommersant daily reported on Monday.

Journalist Oleg Mashkov resigned from his job with the Emergencies Ministry’s Krepkoye Radio (Strong Radio) last week. He told the paper that after several controversial reports were broadcast, the station’s heads started docking the staff’s salaries.

“When we were hired, they made one condition – do whatever you want, air whatever news you want, but do not be too critical of the Emergencies Ministry,” Mashkov said. “We obeyed this agreement, but our programs dedicated to social issues were quite controversial and our heads told us several times that it’s ‘cognizable’ and ‘not ideologically correct,’” he added.

Mashkov said that his bosses were most angered by a report on the situation in the flood-hit town of Krymsk that included an interview with opposition politician Ilya Ponomaryov and another report in which journalists voiced their opinion that Russia’s Orthodox Church should be held accountable for a recent bus crash in Ukraine that killed 14 Russian Orthodox pilgrims and injured another 29.

The flashflood that followed days of torrential rains ravaged the Krymsk area on July 7, killing 153, according to the regional administration’s figures.

After these two reports were aired, “working conditions became unbearable,” Mashkov said. He claimed that Krepkoye Radio journalists’ official salary stood at 10,000 rubles ($310) and every month each of them received about 60,000 rubles ($1,864) in non-taxable cash bonuses. One more journalist with Krepkoye Radio who refused to reveal his name also confirmed this information to Kommersant.

Mashkov said the radio’s bosses promised several times to give the bonuses, but at an editorial meeting last week, Yelena Chernova, the head of Emergencies Ministry’s Editors Office, said that those dissatisfied with the suspension of bonuses could go. Several journalists immediately quit.

“Mashkov’s salary was four times higher than what he said…Moreover, Mashkov was hired for a trial period which expired on July 16 and he does not suit us because of his professional qualities,” Chernova continued.

“Furthermore, no controversial reports were put on the air and Ilya Ponomaryov’s comment could be heard on MChS Media website (run by the Emergencies Ministry),” she said.

“The Emergencies Ministry’s leadership has never meddled in the radio station’s work and never had any claims to do so,” Chernova concluded.