Putin Worried Over Europe and ‘Anti-Russian’ US Plans 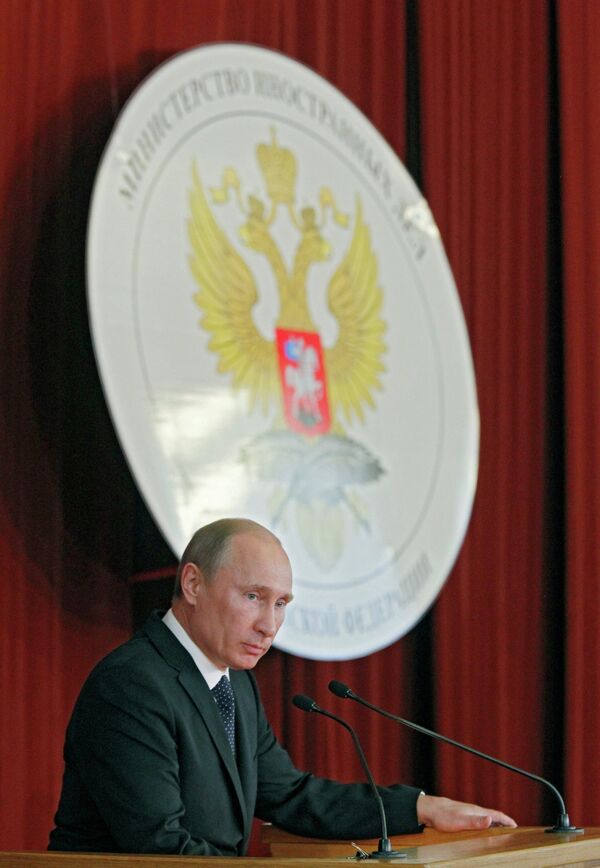 Russia’s President Vladimir Putin once again voiced his concerns over a U.S. bill penalizing Russian officials for human rights abuses and Washington's plans for a missile defense system based in Europe, in a wide-ranging speech to Russia’s diplomats on Monday summarizing Russian foreign policy.

"The swap of the anti-Soviet Jackson-Vanik amendment for an anti-Russian law as well as [Washington's] course for violating the strategic balance by creating missile defenses cannot but worry us," he said.

Last month, a U.S. Senate panel unanimously passed the "Sergei Magnitsky Rule of Law Accountability Act," named after a Russian lawyer who died in custody in 2009.

The bill would impose a travel ban and asset freeze on Russian officials linked to Magnitsky's jailing and death, as well as other human rights abusers in Russia. A similar measure was passed by a House of Representatives panel in May. It has yet to go to a full House vote.

A number of U.S. Senators have threatened not to vote for the repeal of the Jackson-Vanik amendment, which restricts trade relations with Russia, unless the Magnitsky bill is attached.

Putin has vowed to respond to both the Magnitsky bill and the projected U.S. missile shield in Eastern Europe.

Putin said the solution of "many global and regional problems" depended on Russia-U.S. relations, adding he has been "taking note" of U.S. officials' "harsh statements" about Russia

One such area of disagreement is Syria, where the warring sides should be encouraged to achieve a political settlement through dialogue, Putin said.

“No effort should be spared to compel the conflicting sides to work out a peaceful political solution to all disputes,” he said. “We need to foster that dialogue.”

A repetition of a “Libyan scenario” in Syria is unacceptable, he warned.

Russia intends to maintain special cooperation with the emerging powers of China and India, Putin said, and also expressed his concerns over Europe’s deepening economic woes.

"Our cooperation with China has the most important strategic and practical importance," Putin said. "We intend to pay special attention to deepening all forms of cooperation with our Chinese partners including coordination of our actions in the agenda of international affairs," he added.

"This also applies to other rapidly developing and increasingly politically important Asian states, including foremost our traditional partner and friend India," Putin said.

"We continue our course of widening cooperation with Latin America and Africa," he added. "Just a few years ago we did not pay enough attention to this," he said.

"Naturally, we will revive our traditional ties with Europe" Putin added. "I remind you: more than a quarter of Russia's external trade takes place with Germany, Italy, France and the Netherlands," he said.

"The June summit with the EU confirmed the priority character of Russian-European strategic dialog," he said. "At the same time, the level of cooperation with the EU in our view, has not reached its full potential," he said.

"Together with Europe we can meet ambitious targets, much more ambitious than today - the creation of a single market from the Atlantic to the Pacific Ocean with a value of three trillion euros. Life demands movement toward this path," he added.

"There are more grassroots tasks before us, which we must do or we cannot get closer. In particular, easing the visa regime, with a view to a total mutual lifting. Russia is already prepared to make such a move," he said.

NO WAY OUT FOR EUROPE

Putin admitted he was pessimistic about Europe’s ability to find reliable solutions to overcoming the current economic crisis.

“We have to admit we do not see so far reliable options for overcoming the global economic crisis. Moreover, the prospects are becoming ever more alarming and the eurozone’s debt woes and its slide into recession are only the tip of the iceberg of unresolved structural problems,” Putin said.

“The deficit of new development models against a background of eroding leadership in the traditional economic engines, such as the US, EU and Japan, is a drag on global development dynamics,” he said.

The struggle for access to natural resources is intensifying, provoking abnormal raw material and energy market fluctuations, he said.

“The multi-vector nature of global development that has intensified as a result of the crisis and internal social and economic troubles are weakening the dominance of the so-called historical West… And I want to note that this does not make us happy at all,” he said.

This trend alarms Russia, Putin said. “This is because the implications of ongoing developments, these tectonic global economic events and, as a consequence, inevitable changes in the lineup of international forces, are unclear.”

The ongoing developments are even more alarming because some international actors are trying to preserve their former influence by resorting to unilateral actions contrary to the norms of international law, he said.