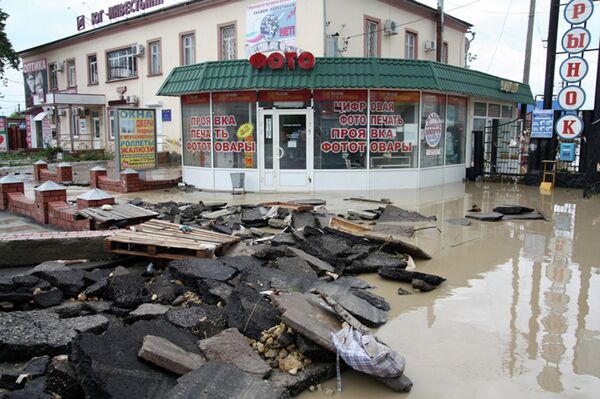 © Krasnodar region Interior ministry
/
Go to the photo bank
Subscribe
The U.S. government has offered Russia assistance in eliminating the consequences of devastating floods that hit the southern Krasnodar Region and killed at least 150 people, the US embassy in Moscow said on its website on Sunday.

The U.S. government has offered Russia assistance in eliminating the consequences of devastating floods that hit the southern Krasnodar Region and killed at least 150 people, the US embassy in Moscow said on its website on Sunday.

“The United States government is saddened by the loss of life, injuries, and devastation that resulted from flooding in the Krasnodar region. Our deepest condolences go out to the families of the victims of this tragedy. We stand ready to assist the Government of Russia and the Krasnodar region should there be a request for such help,” the embassy said in a statement.

Russia’s worst in decades floods, triggered by heavy rainfalls, ravaged several cities and residential areas in the Krasnodar Region on Friday night, including Gelendzhik, Novorossiysk, as well as Krymsk, a town with a population of 57,000 people, located some 87 kilometers (54 miles) from Krasnodar. Over 5,000 homes were flooded in the region as a result of the disaster.

At least 139 people were killed by the disaster in the Krymsk district that was swept by the flood on late Friday night, when most of the people were asleep.

The Krasnodar Region authorities have declared July 9 a day of mourning for the flood victims and have cancelled all festivities on the occasion of Family Day being celebrated in Russia on July 8, as well as all entertainment events.