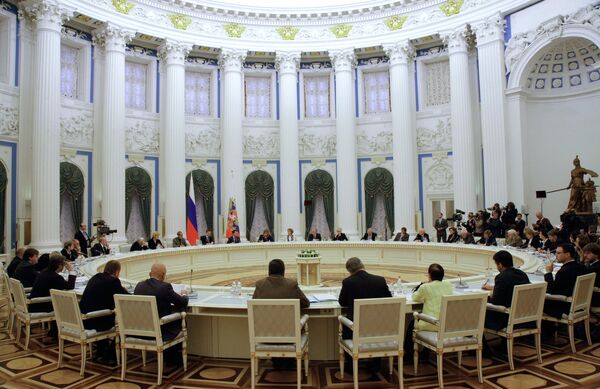 © RIA Novosti . Vladimir Rodionov
/
Go to the photo bank
Subscribe
The Kremlin does not see any reasonable arguments against selecting members of the presidential Human Rights Council (HRC) after consultations with the public over the internet, a Kremlin source said on Thursday.

The Kremlin does not see any reasonable arguments against selecting members of the presidential Human Rights Council (HRC) after consultations with the public over the internet, a Kremlin source said on Thursday.

"We remain convinced that the Council should be formed in an open procedure with the participation of the broad public,” the source said. “We have not heard any reasonable arguments against online voting."

The need to set in motion an open and absolutely transparent mechanism of forming public councils was mentioned many times by Vladimir Putin during his election campaign, including in his program article.

“His program was supported by an overwhelming majority of citizens," the source said.

Struggle continued this week over the HRC, an advisory body comprising well-known civil activists and scholars that is teetering on the brink of going defunct over a mass departure of members after Vladimir Putin’s presidential inauguration in May.

An exodus of respected civil society figures from the Kremlin’s human rights body left it in limbo while threatening to further compromise its blemished reputation.

Most outgoers cited various disagreements with Putin’s administration as reason for the move. They also criticized the new methods of member selection, which includes broad public online voting for candidates, saying they undermine the council’s independence.

Only 23 of the original 40 members remain at the council. Most of the departed members, including rights veteran Lyudmila Alexeyeva and business lobbyist Igor Yurgens, resigned of their own will, while former Constitutional Court judge Tatiana Morshchakova said the council was delegitimized by recent changes to rules governing selection of its members.

The Kremlin human rights council was created in 1993, though it dates back in its current form to 2004, Putin’s first presidency.

The organization has no legal authority, but is entitled to advise to presidents and publicly voice opinion on rights matters, a power it has actively exercised throughout its existence.

The council advocated a retrial for jailed Yukos head Mikhail Khodorkovsky and commissioned a report into the death of Hermitage Capital lawyer Sergei Magnitsky in pretrial detention that said in 2011 that he was beaten to death by prison guards.

However, the council largely failed to influence Kremlin’s policies, prompting its previous head, Yelena Panfilova, to step down in frustration in 2010.

The incumbent HRC chief, rights activist Mikhail Fedotov, has repeatedly said he would quit the council if it loses more than half of the members.