Moscow Police Swoop on Opposition Ahead of Anti-Putin March 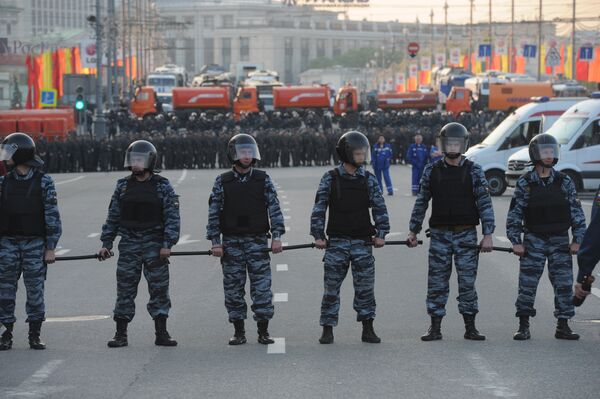 In an apparent attempt to disrupt an opposition March of Millions slated for June 12, Moscow police carried out on Monday searches in the apartments of the protest leaders.

In an apparent attempt to disrupt an opposition March of Millions slated for June 12, Moscow police carried out on Monday searches in the apartments of the protest leaders.

Among those whose apartments have been examined by the police are an opposition leader Alexei Navalny, the head of the Left Front, Sergei Udaltsov, Ilya Yashin from the Solidarity movement and Ksenia Sobchak, a TV star and socialite-turned-opposition activist.

The raids, which are carried out in relation to the riots between protesters and police on May 6, come a day before the opposition holds a new March of Millions in downtown Moscow with a maximum of 50,000 people authorized to protest against the rule of President Vladimir Putin.

Navalny, a key figure in Russia's protest movement against Putin, said early on Monday in his Twitter account: “There is a police search in my house in relation to the case of the mass riots. They’ve almost carved up the door.”

Over 100 people, including journalists and opposition activists have gathered near Navalny’s apartment in southeast Moscow which was cordoned off by police and nobody was let into the house.

Anna Veduta, Navalny’s spokeswoman said that the police had seized all the electronic devices from the apartment, including cell phones, computers, iPads.

The police also blocked the entry to Navalny's office, an anti-graft movement, Rospil.

Udaltsov, whose apartments have also been searched, said that police had not allowed his lawyers to come in until the raid was finished.

“The search has been finished. They have seized piles of evidentiary items (papers, symbols, computers), turned the whole apartment upside down,” Udaltsov wrote on Twitter.

The Ekho Moskvy radio station said that police also targeted the home of Ksenia Sobchak. The TV star said later on the day that the investigators had seized 1.5 million euros from her apartment.

“A group of people broke into the house at 8 o’clock in the morning, didn’t let to slip into my clothes, robbed the apartment, offended me,” Sobchak wrote on Twitter, adding that she could “never imagined that we will return to the country with such repressions.”

Earlier a spokesman for Russia’s Investigative Committee, Vladimir Markin said that over ten searches are planned to be held on Monday in opposition activists’ homes.

"I want to underline that all the searches were held in a strict compliance with the Criminal Code’s norms,” Markin said later, adding that “the investigators demonstrated an absolutely proper conduct.”

Markin also dismissed the reports that the opposition leaders’ lawyers were not allowed to meet with their clients during the raids.

Navalny, Udaltsov, Yashin and Sobchak were summoned for questioning to the Investigative Committee on Tuesday at 11 am, an hour before the planned opposition rally, investigators said in a statement.

The Twitter hashtag #Hello37, which refers to 1937, a year of mass Stalinist purges when over million people were put to the labor camps and executed by the secret security services of the then leader, Iosif Stalin, topped on Monday Russia’s trends in a popular micro-blogging service.

In an interview with an independent TV channel, Rain, Russian human rights activist Svetlana Gannushkina said that today’s searches were the signs of the government’s panic. The authorities wanted to scare off people from attending tomorrow’s rally, she said.

A journalist Maksim Shevchenko, a member of the recently-established presidential council on interethnic relations, however said that today’s repressions will on the contrary attract a huge number of people to the march. Moreover, the participants of the rally will also accompany opposition activists to the Investigative Committee, where they are expected to appear. The attention of the world’s leading media is guaranteed, Shevchenko told the Rain TV channel.

The mass purges over opposition are expected to mount, following the adoption of the controversial anti-protest law that increases the maximum fines for protest-related offences from the current 5,000 rubles ( about $150) to 300,000 ($10,000) for participants and 600,000 ($20,000) for organizers.