Russia Has No Special Interests in Syria - Putin 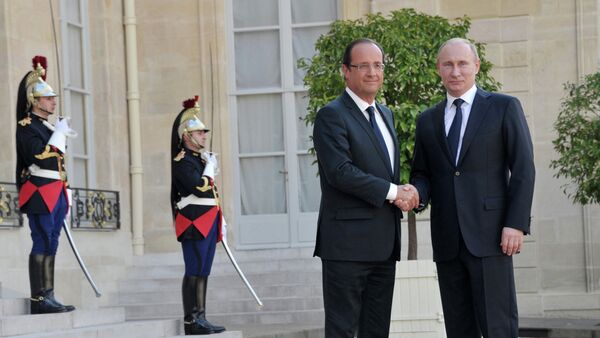 Russian President Vladimir Putin has denied that Russia has any special interests in Syria.

“It is a mistake to think that Russia has some special interests [in Syria],” Putin told journalists after a meeting with his French counterpart Francois Hollande in Paris on Friday.

Putin avoided directly answering the question what he would do if he was asked to receive Syrian President Bashar Assad and his family.

“As regards a meeting with Mr. Assad, I can say that he visited Paris more often than Moscow, so let’s look at the problem from this side,” he said.

The Russian president stressed that the key task is to prevent the situation from going out of control and stop bloodshed.

Over 9,000 people have been killed in clashes between the government and opposition forces in Syria since the start of the uprising against the Assad regime, according to UN estimates.

Russia and China have twice vetoed UN Security Council resolutions over what Moscow called a pro-rebel bias since the start of the uprising against Assad, but have supported UN special envoy Kofi Annan’s peace plan. Moscow insists that both the government and “armed terrorist gangs” operating in Syria should be held responsible for the unrest.

French President Francois Hollande on Tuesday said on TV that he did not rule out military intervention in Syria if approved by the UN Security Council.

Over 100 people, including dozens of children and women, were killed in Houla in Homs province, in the May 25-26 attack that was one of the deadliest single events since the uprising against Assad began in March 2011.

Putin also told journalists on Friday that Russia’s aim is to “reconcile all sides to the conflict” to promote “a political solution to the problem.”

According to the UN, the six-point plan put forward by Annan in March calls for an end to violence and access for humanitarian agencies to Syria. It also says detainees should be released, inclusive political dialogue started with account for the aspirations of the Syrian people, and unrestricted access of international media to the country ensured.