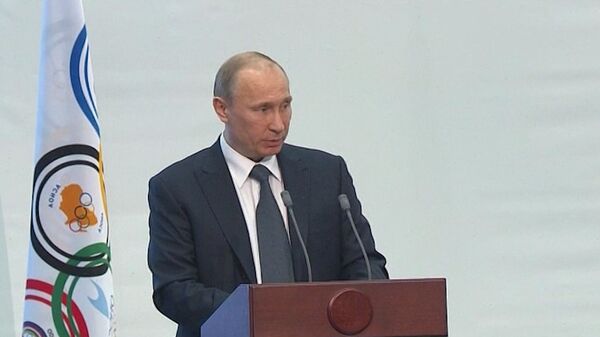 Russian President Vladimir Putin has yet to make up his mind on whether or not to attend this summer’s London Olympics, his spokesman told RIA Novosti on Friday.

Russian President Vladimir Putin has yet to make up his mind on whether or not to attend this summer’s London Olympics, his spokesman told RIA Novosti on Friday.

“Putin has not yet made that decision,” spokesman Dmitry Peskov said. He offered no details on when Putin would announce his plans.

British newspaper The Guardian cited earlier this week unnamed “diplomatic sources” as saying that Putin would “snub” the London 2012 opening ceremony on July 27 and that Prime Minister Dmitry Medvedev would travel to the British capital in his place.

Britain’s Foreign Office has said some 120 heads of state will attend the opening of the Games, making it the biggest ever top-level international gathering.

The Guardian said Putin’s decision to stay away was linked to British-Russia relations that have come under strain over a number of issues, from the murder of former Russian security agent Alexander Litvinenko in London in 2006 to sharp disagreements over how best to resolve the spiraling Syria crisis.

British MP Denis MacShane, the former Labour Europe minister, said on Wednesday he believed the Russian president did not want to come to London and “face difficult questions” over what he said was “his refusal to uphold the rule of law and justice back in Russia."

MacShane was among a group of backbench MPs who voted in March to ban Russian officials suspected in the death of lawyer Sergei Magnitsky in a Moscow prison in 2009 from visiting Britain. But the British Foreign Office has shown no sign of adopting the non-binding vote and has ruled out a ban.

Putin cancelled a scheduled visit to the G8 summit in the United States earlier this month, over what his spokesman said was the pressing need to finalize a new cabinet following his May 7 inauguration for a third term. The Kremlin denied the decision was linked to recent disagreements with the Washington.

And although Putin has never pledged to attend the London Games, his decision to send Medvedev in his place would seem to be another signal that ties between Russia and the West are on a downward slope, a leading Moscow-based analyst said.

“It is of course not a given that the president attends the Olympics,” said Masha Lipman at the Moscow-based Carnegie Center think-tank. “Taken separately, this would mean nothing. But given other developments, it is tempting to interpret it as an indication of deteriorating relations with the West.”

“But suggestions that he is afraid of visiting London are ridiculous,” she said. “But he may be reluctant to visit Western countries these days as a sign of his dislike of their policies.”

Putin, then prime minister, attended the 2008 Beijing Olympics, while then President Medvedev stayed in Moscow. The Games coincided with an attack by Georgian forces on the breakaway republic of South Ossetia and resulted in a five-day war between Russia and Georgia.

Putin arrived in the former Soviet republic Belarus on Thursday in his first foreign visit since returning to the Kremlin. Belarus has been criticized by Western governments over its record on democracy and human rights and has been ruled by President Alexander Lukashenko since 1994. Lukashenko, once called “Europe’s last dictator” by the United States, said on that Putin’s visit was a sign a “great future” awaited his country.