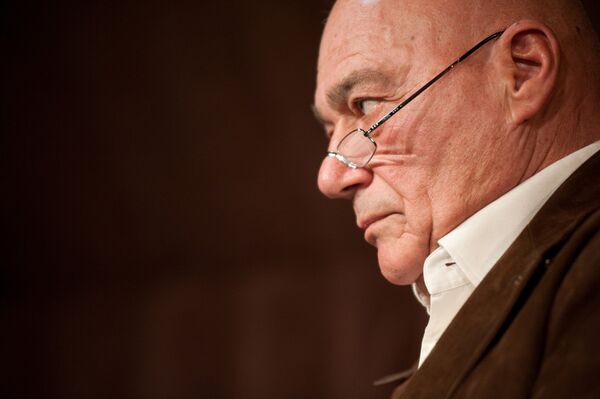 One of Russia’s best-known journalists has voiced stinging on-air criticism of the country’s ruling United Russia party, led by Prime Minister Dmitry Medvedev, in a rare show of dissent on state-controlled national television.

Vladimir Pozner, 78, told viewers that the unanimous show of hands that saw Medvedev installed as party head at a May 26 congress reminded him of the Communist Party “during the years of Soviet stagnation.”

Medvedev was approved as party chairman at the behest of its former leader, President Vladimir Putin.

“There was not one vote against, no one objected,” Pozner told viewers of his Channel One program, which aired late on Monday. “You must understand – this simply doesn’t happen. Where several hundred people, or even one hundred people, are gathered, at least one person will object. This is how people are.”

“What are they afraid of? That they will be excluded from the party?” Pozner went on. “What about democracy? You are saying that there is none.”

Pozner also invited Medvedev to come on his show and “explain to me and others” the process that saw the ex-president approved as party chairman.

United Russia general council head Sergei Neverov said later on Tuesday that Medvedev's candidacy was "widely discussed" at regional party conferences after his nomination by Putin in mid-April, and that delegates at the congress were expressing the views of their colleagues throughout the country.

The veteran television presenter is just one of a number of celebrities to have spoken out against the authorities here in recent months and follows the staging by well-known literary figures of a high-profile protest rally in downtown Moscow earlier this month.

Putin announced in mid-April that he would step down as leader of United Russia, a move widely viewed by analysts as an attempt to distance himself from the party, which has seen a dramatic slump in support in the last 12 months.

United Russia’s victory at disputed parliamentary polls last December was the trigger for unprecedented anti-government protests, which continued after Putin’s election to a third term in the Kremlin in March and turned violent on the eve of his May 7 inauguration.